Seven-year Old became Eight-year Old today. He was born in the Greenwich Country Club (aka Greenwich Hospital) back when we lived in the New York City suburbs. I've been home 45 minutes since picking up both kids. So far I've given both kids snacks, disappointed birthday boy saying he couldn't go outside because of tropical storm dangerous thunderstorm haily conditions, iced a birthday cake, punished birthday boy for hitting his little brother, answered the door three times for one of his friends and one other time for a classmate. She and her father said they had a surprise for him at their nearby house. So the punishment magically ended and he rode away on his bike, at which point the Heavens opened up and emptied about half an inch of rain and counting.

Speaking of weather, I had a nice conversation with my celebrity TV weather friend Julie Durda on Twitter this morning before work. She told me that the extremely localized torrential rains from yesterday, of which I got none, happen when the sea breeze develops. OK!

Tonight I'm drinking Whirlwind Witbier brewed by Victory Brewing Company in Downingtown, Pennsylvania. This Belgian-style wheat ale is a "swirling dynamo of flavor, with a steady calm of satisfaction". So says the label! I wasn't going to review this beer tonight until I heard on the radio about a violent path of thunderstorms headed my way with hail and 60 mph wind gusts likely! So much for the happy little smiley wind picture on the label. He can bite me! Enjoy by March 1, 2011.

Subtle aroma with lemon, wheat and citrus. The flavors are more pronounced, starting with some spicy coriander and cloves. The spice mixed with a strong lemon citrus burst really hits the spot! Very bright and refreshing flavors. Wheaty, on the sweet side, but not too sweet. Carbonation level is medium-high and perfect, a little tingly in my mouth. I could easily drink this all day long! Check it out! 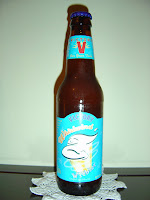 Had this beer as a "research" beer for the wit style a couple of weeks ago in preparation for brewing. I felt the flavor was very grainy. Like I was chewing on the spent grain at the brewery...different than I expected, but good.

Hey. Man, everyone is a beer trader or beer brewer or something cool!

Just joking, I didn't get any of that grain flavor though. Could have been the cake icing?