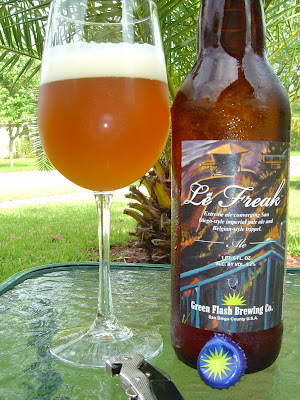 Today was the last day of school in Broward County, Florida. School officials thoughtlessly and inconveniently made it another half day putting added stresses on working parents. On top of that, they decided not to offer the after-care program that they offer on every single other "early-release" day. Perhaps the elites don't think it's such a big deal, but in all honesty, it would have been 1000% better to not have had school today at all. At least then I'd have been able to take my son to my office for a full day. You know what? Tons of parents agreed, according to my son. His 28-kid (yes, gulp, packed in like sardines, too) class had less than 20 today. Seems like they do school like they do elections here in Broward!

This afternoon I am drinking Le Freak Ale brewed by Green Flash Brewing Company in Vista, California. I've heard this beer referred to as a Belgian IPA, but the bottle describes it as an "extreme ale converging San Diego-style imperial pale ale and Belgian-style trippel". This one came back from my friend's Washington DC visit. Thanks a lot! There is a picture on the label behind the words, but I'll be damned if I could tell you what it's depicting beyond a vague nature scene with a guard house and railing view over a mountain. Perhaps it's a new style of  impressionism!

Damn! I opened this outside for my photo shoot and even with some decent wind, the aroma was super powerful. Spicy and tropical fruity at the same time, some pine and a yeasty component, too. The flavors start out very similarly. Fruity pineapple and mango with a bitter orange peel there as well. A good dose of pine with spicy black pepper rounds out the most noticeable flavors. Balance? Hmmm. Well, the sweet and bitter do not combine to make a balanced neutral, not at all. You start with bitter, then the beer turns sweet, and you swing back and forth like a pendulum for the whole beer, really quite awesomely!

Yeast and sugar give some other dimensions as you drink your 22 ouncer. The 9.2% alcohol also jumps in the mix to accentuate the fruits and spicy black pepper. Medium carbonation is perfect, flavors out of this world, nice spicy, bitter and alcohol kick, fruity loveliness... what else could you possibly ask for in a beer? If you answer that, you are greedy! Dry and bitter fruitiness linger on your palate for a long time. Wonderful beer! 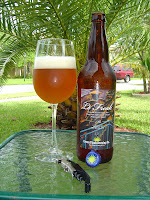 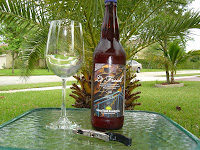 Here's a before and after opening in my front yard. The different cars driving by should be a giveaway on that one. Yes, thank you, I know that is a beautiful Date Palm in the picture. I planted that when it only had 4 fronds, after that bitch Hurricane Wilma ripped the tree that was situated there in half, leaving it on my driveway twisted in wind and street debris! I did take my time, but the neighbors were giving me a WTF glare after four staged beer photos.
Posted by Beer Drinker Rob at 7:37 PM

Ooh, we're going to Green Flash this weekend on our San Diego brewery trip. I'll have to check this one out. :-)

Hi pintmuse. I am so jealous, green (flash) with envy. (not)LOL. Anyway, let me know how your trip goes, and how you like this beer.

BTW, you seem to have your share of the best beers available. Would you be interested in doing a guest review sometime? Being cool is part of the screening process, but you certainly seem to qualify!

Yeah, quite the name!

A before and after picture of yourself would have been great.

Hey Lost. I wasn't feeling too bad, and actually was just getting started on the night the Flyers set up their summer country-club schedule.

I haven't tried that one yet (will have to add it to LONG list of "to try"), but I'm about to post a review on their IPA that I had last weekend. It was pretty nice!

This is the first one I've had from this brewery, though the Cooking Asshole guest reviewed their Imperial IPA a while back. http://www.dailybeerreview.com/2010/02/green-flash-imperial-ipa-cooking.html

I'll have to check out your review.

I'm still waiting for the Corona people to give me a call to sponsor the site!

Dude, based on your bottle art comments I will venture that you haven't spent much time on the beaches of Southern California (or watching Baywatch)? That is definitely some art of a life guard tower in front of the beach bluffs prevalent in SoCal. Duh! Haha

This beer sounds fascinating I will have to give it a try. The Le Freak name makes me think it will be a wild ale for some reason, but you say it's really more a belgian/IPA thing?

Hey Royce. Yes, Le Freak is a Belgian IPA and No, I've never been to Southern California except for a pit stop at LAX on the way to Tahiti in 2000 from NY.

Baywatch? Only for the chicks running. Oh, and Knight Rider, too!

Just had this beer! I thought it was delicious and super interesting. I don't know that it would ever be a regular rotation beer for me cause the flavor components didn't quite come totally together on my palate. The varied flavors and the mix of sour and fruity and some darker flavors (licorice or something) made it an interesting mix.

Will be posting my own write up soon.

Hi Royce. Very different, interesting, flavorful. Unfortunately for me, I don't even get to decide whether this is in my regular rotation--beers from this brewery don't come to Florida.