A handful of you keep bugging me to include more personal stories now and then. Well, here you go, and it's even real-time current!

My mother arrived yesterday evening. She drove all the way from Pennsylvania with one stop in Atlanta to see my sister on the way. She'll be taking my eight year old with her tomorrow for the trip back north until we meet up with them in August for a family vacation in New Jersey. We'll miss him for those two weeks!

I decided to experiment with three non-beer drinkers before dinner: mom, wife and mother-in-law. I cracked open a wine bottle, but I only slightly alluded to them that this was a beer. The giant fluffly white head of Saison de Lente was a giveaway though, and prompted some additional questions. In the end, my mother loved it and the other two, well they said they did though I have my doubts. It's amazing how fast the bottle went with four people! Tonight, Maharaja for just my mother and me!

After the tasting, my mother showed me the 10 boxes of crap that she had brought down for me. Yep, she no longer wants my old things cluttering up her house in PA. Now she told me she threw away boxes of trophies and plaques, so what's with the two more boxes she brought? I was only going to save five or six of the most prestigious ones and toss the rest. That was until my eight year old got all emotional about it, and I'm not sure why. These were my memories. Anyway, he has the tropies and medals displayed on his dresser now. Sweet.

What else? Old  books, some saved, some trashed. Really? Falling apart French text books from 20 years ago? Oh, no. Here we go! Old football jerseys, lettermans jacket from high school, college wrestling shoes. You should see the pictures they took of that! The jersey barely fit me and I used to wear it over top of shoulder pads! We had quite a few nostalgic laughs. Old letters and photos from an old girlfriend? Am I supposed to read these and think what might have been? Tough to trash them though. Some random baseball cards like my 1973 Pete Rose and autographed Mike Schmidt card, though most of my baseball cards remain in PA for now. I guess that's it. Was a lot of fun.

Tonight I'm drinking Avery Anniversary Lager Seventeen, a dry-hopped black lager brewed by Avery Brewing Company in Boulder, Colorado.  The label has a nice illustration of hops growing and calls this beer "A Dark Study in German Hops". The label also says "183. Humulus Lupuls L." On the side is a little story about the making of this beer. Apparently it's the first lager they've made for an anniversary beer. The paragraph ends with "Peace to all and follow your dreams!" I took a picture. Don't be too optimistic about that! Bottled in May, 2010. MALT LIQUOR.

Chocolaty aroma yet still hoppy. Are those cherries I smell? Flavors start out similarly with chocolate, but there is also a big roasted and burnt malty component, which is joined by quite a bit of bitterness. Yes, hoppy and very bubbly, a bit rough in the mouth. I will comment that the bitter and roughness eased with some warmth, so I would make that a priority if I were to drink this again (hint: you should too). Tastes continue with some earthen dirtiness and smoke, still bitter and perhaps even a little sour. The 8.69% alcohol is a little noticeable, but is mostly hidden behind the deep flavors. It could be the style, but I'm not in love with the dirty, roasted, burnt, smoky, malty flavor profile. Not a bad beer, though. Check it out!

The Girl with the Dragon Tattoo ~ Larsson, Stieg -- #1 Kindle Store 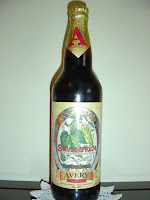 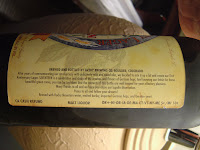 It's actually very readable if you click it!
Posted by Beer Drinker Rob at 5:31 PM

You're lucky, my mom hates most beer. Her idea of really good time is an ice cold Corona with a lime in it. That's like, what I put in my water bottle when I go running.

My husband just got back from his parents house in Chicago and brought back all his baseball cards and cassette tapes from the 80s. Good times!

Yeah, it's a lot of fun to look through the old stuff once in a while, and it's been a long time for me.

My mom liked the two beers I offered her, but she lives over a thousand miles away. And I have to live with my (non beer drinking) wife. LOL.

Corona and lime in the water bottle. I'm gonna need to try that!

Nice story, thanks for sharing!

I actually have the Avery 17th Anniversary Black Lager in my fridge right now, so I intentionally skipped your review text.

Will report back after trying it!

I don't usually like to hear about the beers I'm about to drink beforehand. Sometimes, yes, I know b/c of mega-hype. And I do like to look afterward.

Okay! Just had this two nights ago, reporting back now - I loved it. Loved. It.

I am a sucker for beers with this level of complexity, assuming they put it together reasonably well. You correctly point out that there the mouthfeel can get a little rough, and the beer can get a little hot even at 8.7% abv. In fact I couldn't help but quote you in my own write up of the beer:

That being said, I still loved all the weird and crazy flavors and smells packed into this beer. It is really unlike anything else I've had, in a good way. It was drinkable despite that, so I give it high marks.

Another great find by yourself, thanks again.

I didn't really find it. Total Wine brings stuff to me. And I know every beer on their shelf! If it's new, and reasonably priced, and sometimes not, I buy it. But just for the science!