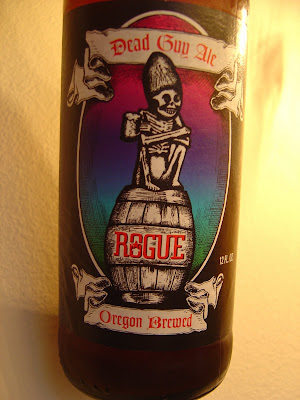 Tonight I'm drinking Dead Guy Ale brewed by Oregon Brewing Company in Newport, Oregon. Yeah, I know. The label says Rogue and everyone knows this is the classic Rogue beer. But I can certainly read the back half of the label! It's been a long time since I had me some Dead Guy, probably all the way back to the time I reviewed it in March, 2009. Wow. I took advantage of a coupon I had and knocked the price of a sixer down to $8.99. Oh, now I remember why I don't drink this very often! Catchy name, and the skeleton on top of the beer barrel makes for an equally eye-grabbing label.

Malty and sweet honey aroma, with perhaps a touch of citrus in the background. The flavors start out with an orange citrus rind bite, along with some tea. Those flavors are challenged with some sweeter honey and a touch of caramel. By now, your mouth will be completely coated. Hoppy and bitter components, yet the beer is not bitter. A little spicy on the back side at which point you will also notice some drying alcohol, which also warms you up a bit. Digging around (because not on the beer profile at Rogue), I found this is a 6.5% alcohol beer (I guess you can trust Beer Advocate, for facts anyway). Good medium carbonation, creamy and smooth.

You know, this beer is NOT as I remembered it at all. I couldn't have told you what style it was or anything and perhaps just guessed a few flavors. Oh so many beers ago was March 2009! But I still think it's a really nice beer and despite losing touch, we're still old friends! We cool! Now I have four more left... Later.

6 Feet Under Beer Soap - Made With Rogue Dead Guy Ale 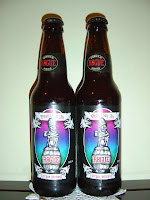 A Pair of Dead Guys!
Posted by Beer Drinker Rob at 5:41 PM

Rogue makes som great beers but dead guy is not one of them...for the price at least

There are others I like a lot better. I thought this was one of them until I had it again tonight. Still, a pretty good beer. But like you said about the price... I agree.

Actually, Beer Advocate often has wrong abv percentages listed as beers change somewhat from year to year, and they usually only get updated when a member notices and reports it. Some beers swing wildly up and down the spectrum from year to year, so it may be different from what you see there (Smuttynose Gravitation went from something like 8.6% last year to 12% this year, for example--this is a significant jump).

Yeah, I said that "tongue in cheek" which is a very frequent occurrence on this blog.

But, considering how many people fall all over Dead Guy and it wasn't updated, I think we're pretty safe, a least within a percentage point.

I'd do a little more research if I really cared, but then this would be real journalism.

Anyway, the most serious part of this comment... Thanks for stopping by and taking the time to speak up!

My favorite is brutal bitter but they also do a fantastic imperial pilsner and it is $13 for 750ml! Fuck you! The brutal bitter is $13 a six pack! As you know I worked for them for a while but with the market in portland they are losing. Nationwide? Not that bad.

Looks like I have a little journalism to do tomorrow.

I'm a big fan of the Double Dead Guy!

Hmmm. Never did the Double Dead Guy. Yet.

I've never been blown away by the few Rogue beers I've had, and some of their pricing makes me hesitant to try a few others. $4.50 for a 7 oz - christ! I'd rather put that on a 12 oz Gubna! However, I am very much looking forward to trying their spirits when they hit south FL. I have sone DFH gin that Ed gave me and I'd love to find Anchor's Old Potrero whisky.

They have some great ones and some that I could easily do without. Yes, the prices are often a deterrent, too. About the hard stuff, I'm not much of a spirits drinker. SoCo in college one night pretty much took care of that!

I agree with BDR..Double DG is better but, overall, Dead Guy would be my least fave Rogue (though it's still much better than a lot of other horse piss out there).

Hey bunny. So do you have a real opinion?

OK. To settle the ABV dispute above, I asked the National Sales Manager for Rogue. She said, "My sources say 6.5%"

Now I don't know about you guys, but I'm pretty sure her sources would know!

BDR, I didn't mean to agree with you, dude...sorry. Looking back, it was cheaperthantherapy that likes Double DG. That said, my real opinion remains that Dead Guy is still better than a lot of other horse piss out there (like Bud with Lime...sends cold shivers down my spine just to type it!).

Why you keep calling me BDR? Is that some kind of slur?

Yeah, on a beer review site, I get used to reading the real meaning from context, even if it's the exact opposite of what was said. :)

Oh, bunny, you're my favorite!