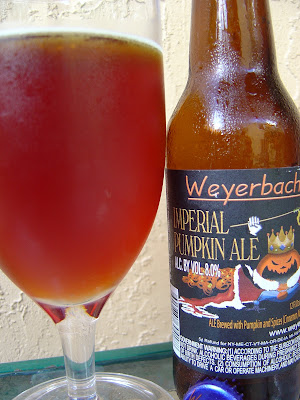 Tonight I'm drinking Weyerbacher Imperial Pumpkin Ale brewed by Weyerbacher Brewing Company in Easton, Pennsylvania. I first tried this beer on a day many of you would like to forget. No, stupid, not Valentine's Day or even Christmas (for you non-believers)! It happened on the day I joined Twitter! If you don't know what I'm talking about, feel free to follow me for basically the same stuff you find here, just in 140 characters or less and in real time.

So the bottle depicts the Pumpkin King with his robe and crown and scepter leading his minions into Halloween battle! Very strong nutmeg and cinnamon aroma. Spicy flavors also kick things off with a little sweetness as well. But there is also a nice hoppy and slightly bitter contrast. The 8% alcohol is a secondary player which also complements the spices. I'd say that I don't taste any pumpkin. The body is pretty decent but the malty flavors are more like pancake syrup and dough and brown sugar with a touch of pear juice. Those flavors are pretty nice, though, so I'm not really doing anything except making an observation. The spices, however, well they went slightly overboard. I wish they were just a little more muted. Anyway, I thought this beer was very good and is definitely in the top bracket for the style.

Pumpkin, a Super Food for All 12 Months of the Year 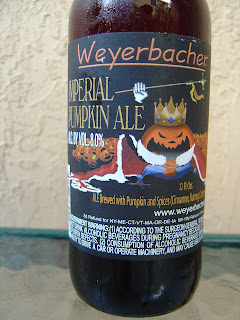 Jeez, you're probably pissing pumpkin-colored by now, amirite?! I don't think we get many PA beers here.

Yeah, that might be all for pumpkin beers for the year.