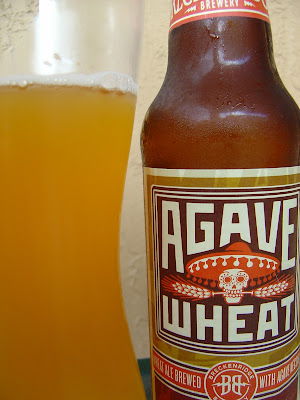 Today is Halloween. It's gonna take a pretty big trick to equal the one I received yesterday! On tap for today: clean the Honda well enough that it passes the end-of-lease inspection on Friday. Check. Baseball with kid. Check. Drink beer and do a review. You're reading it now. Pay a bunch of freakin' bills. Sucks. Community Halloween party. Later. (If you're there, I'll the the one costumed as the broke middle-aged man with two kids). Trick-or-Treating. Later, later. Then, a few more brews to wind down.

Please, God, let this be a treat. Today I'm drinking Agave Wheat brewed by the Breckenridge Brewery in Denver, Colorado. This is a wheat ale brewed with Agave Nectar. Not quite sure what that tastes like, but I am about to find out.

Sweet aroma, sugary fruit, I guess that interesting smell is agave. And wheat. Fruity sweet flavors also start things off. Wheat flavor and texture right behind that. Then a distinct orange-ade takes over. Just like a kid's drink, barely carbonated too. A little thin, on the lightly sweet side, and not very beerish. Interesting, decent flavors. I thought it was OK, once in a while for sure. At least it wasn't a trick! 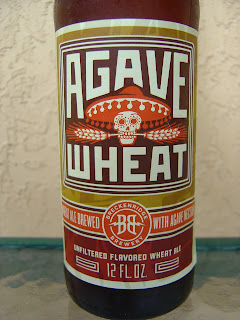 The more and more I try the offerings from Breckenridge Brewery, the more and more that I'm coming to the realization they lack some consistency in their product line up.

From what I've heard about them recently however, is that they do indeed understand this and are taking steps to cure this problem. I hope this is indeed the case and if so, hats off to them for admitting it and striving to make the improvements.

Breckenridge is a new brewery here in S. FL. I think they sent us five beers, and I definitely see where you're coming from. Most have been pretty good though, so far.