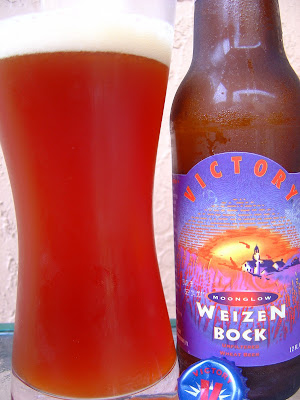 What is with the long delay between NLDS and NLCS? Jesus, it's killing me! Luckily, DirecTV is having a Center Ice "trial preview" where I get to watch most or all hockey games (not sure) between now and October 24. So I'm taking full advantage of that and filling the baseball void with my awesome Flyers. They play some other team tonight--it doesn't really matter which one because these guys are on their way to the Stanley Cup!

Tonight I'm drinking Moonglow Weizen Bock brewed by Victory Brewing Company in Downingtown, Pennsylvania. This is their fall seasonal and an unfiltered wheat beer. "Moonglow shines with its own magical yeast strain intact, and exudes a radiance all its own!" Enjoy by SEP 24 2011.

Mmm. I like the aroma. Lots of bananas on top of pears and wheat. Spicy start and again with the bananas, nice and ripe. Cherries, too, I think. And just a hint of lemon. The wheat adds to the flavors and textures as well. A sugary component is also among the stand-out flavors in this beer.

Now I don't know how much alcohol is in this dude, but I was caught a little off guard. IT IS IN THERE! Of course I can go look around and find out. So demanding. Hold on! OK, the Victory site says approximately 8.7%. See, I told you so! Warmth, even a little burn, and nice play with the fruity flavors. Great carbonation. You finish with a spicy alcohol warmth. Pretty good beer.

Five. Minutes. Later. I have been sitting here for like 5 minutes trying to figure out one word to describe Moonglow. That's when I read the little bottle story again. Poof, they had the word there. This beer is an elixir! Personally, I could have done with more masking of the alcohol, but this is one you should grab. One other thing. With all the awesome Philadelphia sports victories going on, Victory better ramp up their volume! LOL. See you in the World Series! 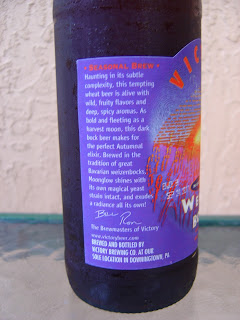 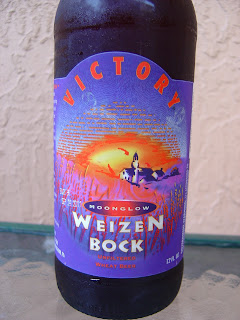 Words are readable but don't bother telling me they are blurry. I already know. Dark before 5pm today. And I don't live in Alaska.
Posted by Beer Drinker Rob at 5:50 PM

The color on that thing is unreal. I've never seen anything like that. Your prowess continues to entertain and amaze. Thanks for the post.

Thanks a lot. The color and a lot about this beer surprised me. As usual, I picked it up b/c it was new, but I really didn't look at the label or think about it until drinking time.

Nice beer, not my favorite, but I bet it's someone's favorite.

Just picked up a 6-pack of this up these evening. I definitely agree with the banana and the spice but I am not getting the alcohol like you did.

Hello! I now have a face to go with the name! Cool! I didn't do a proper browsing through your site last time, but I really like what you did with your site.

The color of this beer is awesome! I used a color like this a lot in a pumpkin painting I did yesterday. I want pumpkin pie now!

Have a nice day!

Hey BeerPancakes. I guess you'll just need to try a little harder. You do have 6 of them. I wasn't trying to make it sound like the alcohol was obnoxious, but I did feel it. I'm a lightweight!

Hi Tahira. Thanks, yes, was an overnight transformation. I can hardly believe its the same site myself and it was surprisingly very simple. Glad you found the picture, and hopefully you weren't offended by the rest of the About page. When do we get to see the pumpkin painting?

Don't worry. Not offended whatsoever ^_^! I like the way your write.

Oh it's a present! So can't blog about it just yet.

Yo TJ. I know you can handle it. Otherwise, you'd have stopped talking to me a long time ago. Can't wait for the surprise.