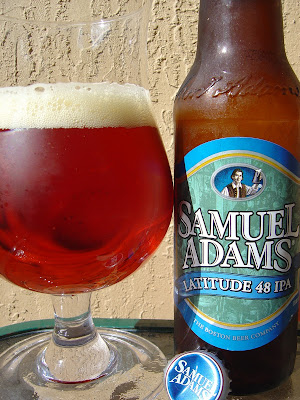 This afternoon I'm drinking Samuel Adams Latitude 48 IPA brewed by the Boston Beer Company in Boston, Cincinnati or Breinigsville, Pennsylvania. I never bought this beer when it was part of one of their mixed 12-packs, mainly because I don't like a few of them. And Ed Roberts warned me about "accidentally" opening one of those up at Total Wine. But I did finally get a chance to try it during my trip to Pennsylvania in August--yep, dear old dad had a few of those mixed packs waiting! So when I saw it appear in sixers at Total Wine this morning, I decided today was the day to review it.

The label is classic Sam Adams style. Nice blues and greens. There is a story describing the selection of German, English and American hops grown near the 48th Latitude or "hop belt". Guess where the name of this beer came from? Enjoy before February, 2011. You all know about my love affair with Sam Adams Boston Lager, so let's see how this one stacks up.

OK. So I am actually drinking my third bottle right now. Jeez, it was so hard to get rid of the family for just a few minutes to type this shit up.

Hoppy and spicy aroma with plenty of lemon and a hint of bread behind that. Citrusy flavors, mostly lemon start things off. A bit grassy as well. There is a malty bread balance with some herbal tea as well. This beer definitely has that distinct "Sam Adams" signature flavor to it. Some spicy little hits to the palate come toward the end. Good body and excellent carbonation. Clean and crisp, with a refreshingly bitter finish. Alcohol in this guy rings in at 5.8% and was not a factor. A solid IPA, good flavors, recommended.

On tap for the rest of the night? Thanks a lot for asking. Flyers to beat up the Penguins at 6 pm. Phillies to take down the Giants at 8 pm. And shit, I gotta go throw Big Ass Ham in the oven now so it's ready in time for dinner! I'll be back! 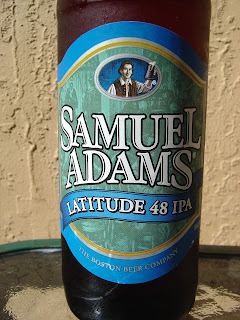 I really wanted to try this too, but like you I don't want to waste money on the 12 pack because some of the other beers in that pack are not very good. Maybe I'll suck it up and buy it so I give it a try!

Great beer. I prefer the old packaging though!

I knew there was something that looked different about this. Yes, that's the bottle from the Brewmaster's Collection. I'm guessing that because mine came in a six pack, that's the reason for the new label. I like yours better too!

My favourite Sam Adams in a while. Super easy drinking, happy beer :)

This one is a really nice Sam Adams beer!

The beer is no where near that red in color. Very bitter, but nice smoothness to it. Probably not something I'd pick up again, glad that I at least tried it in the "Hops Tour" 6 pack.

Yeah, not bad, but I choose to drink others first. Um, I didn't photoshop in the color, though. That's a real picture. Maybe the sun is playing tricks with it, though.