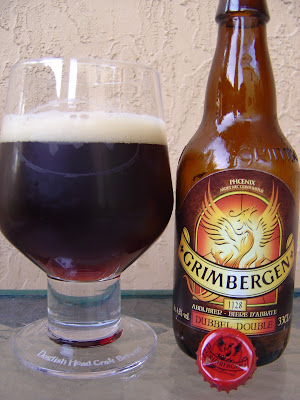 Tonight (which was last night) I'm drinking Grimbergen Dubbel brewed by (and based on all the languages and vowels and abbreviations, this could be totally wrong) the Alken-Maes Brewery in Waarloos, Belgium. Good freakin' luck with that link unless you speak French or one of the other crazy-ass languages also represented on the bottle. This beer came back from Barcelona Buddy's travel trip abroad. The label has a Phoenix on the front and the number 1128 which very well might be year. There is so much fine text in so many languages on this bottle that I am utterly confused. Anyway, Best before 29-07-11 is stamped AND notched on the back.

Musty aroma with some dark fruit, a hint of raisins. Light spicy start, some cinnamon. That was then interrupted by sweet caramel and delicious toffee. Oh yeah, brown sugar flavors as well, clear as day. The very fine carbonation bubbles are really tingly and creamy. The 6.5% alcohol cuts through the initial sweetness a bit. Yeasty component noted as well. I really liked this beer, and without trying to sound ridiculous, it was pure pleasure. Complex. Shit, only 33cL, that part is a rip-off. Creamy caramel and brown sugar finish. Terrific beer! These are the monks I wanna party with (I think there's a similar Stripes quote). Hmmm, not even sure monks are involved, just felt like saying that. 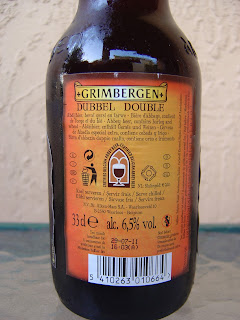 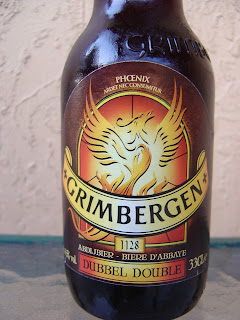 I love dubbels and this sounds excellent. I've barely finished my first cup of coffee and I'm ready for a bottle! :)

Yeah, really nice flavors. I'm going to need to check out the import section of the liquor store more often.