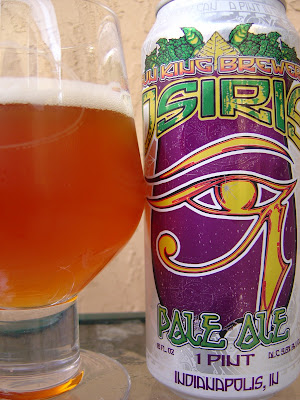 It's Friday. My coworkers and I just polished off the rest of a ham casserole that I made last night. Later this afternoon, we're gonna do an impromptu beer tasting, or at least that is the plan as of right now. Just a small stress reliever before the weekend. Funny that I think we are going to need to do our sampling from either coffee mugs or styrofoam cups. Damn! And I forgot my camera.

If you lived with me, last night you might have found me drinking Osiris Pale Ale brewed by Sun King Brewery in Indianapolis, Indiana. This pounder comes in a can and says several times around the top rim, "A PINT IN EVERY CAN". Marathon Marie is responsible for me drinking this one. A story on the back talks a bit about the beer.

Malty and bready aroma with a little orange citrus and spice, nice but not too powerful. Citrus orange flavors kick things off, much fruitier than I expected. A spicy bready aspect is also there from the start. After the initial sweeter flavors, this beer went straight to the other end of the spectrum, becoming more and more bitter all along the way. The progression from some pine to a more citric lemon and grapefruit bitterness to an all-out astringent dry finish was rapid. A slight 5.6% alcohol and medicinal aftertaste lingered behind. Quite the hop-forward pale ale, which I certainly appreciate. Nice beer! Grab it next time you're at the Indy 500!

Hieroglyphs and the Afterlife in Ancient Egypt 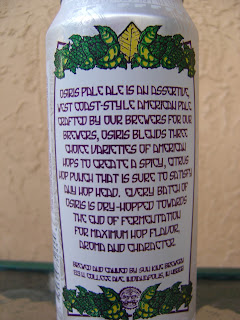 They have this at the AAA Indians games now - so even when they lose, we win.

I'd have liked to have been the sales person on that call. No brainer "yes" from the Indians. :)

I'm intrigued, I'll have to try to find this sometime. Cool packaging too (if a little bright).

Yeah Royce. Check this one out when you can.

That's how I make sure I am invited to off-site Christmas parties!