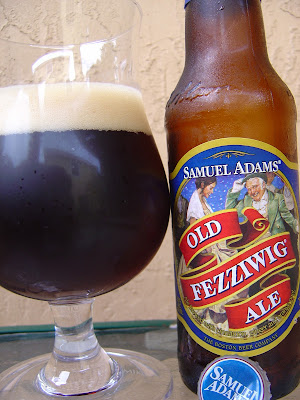 Today I'm drinking another from the Samuel Adams mixed pack, Old Fezziwig Ale. I have reviewed this beer before though it was during the first month of this website back in December, 2008. A lot has changed around here since then! Honestly, I don't remember a thing about this beer and don't believe I've had it since. The label is a little busy with what I think is a Dickens scene behind a huge red ribbon with the beer name. Needs a face-lift. Best before May, 2011.

Malty aroma with some roasted nuts along with its cinnamon and ginger spiciness. Toasted, roasted, creamy, malty flavor start. Some sweet chocolate and brown sugar are very noticeable right at the beginning as well. The pie spices are also shouting throughout and are particularly enhanced by a large dose of prickly megaphone carbonation. Toward the end, an orange flavor builds and builds; reminds me a bit of a sugary orange candy. (OK, so now I've mentioned each of the components written on the label. Call me a cheater if you'd like).

Though the alcohol is only 5.9%, relatively low for a Winter Warmer, it is still noticeable and still gives a nice warming tingle to the body. On the barely sweet side but overall very well balanced. An enjoyable and flavorful beer all around, though two is definitely going to be the limit. Luckily, that is exactly how many came with this group. Check it out before it's gone for the year!