By popular demand, I'm going to tell you a little ditty about one of my weekend projects and how changing the time on a clock can literally take around an hour. Yes, I know!

First challenge, this is no ordinary clock. No, it's not Big Ben, either. But it is hanging around 20 feet off the ground, very much out of reach. We have leaned over the balcony railing with a broom handle to fix the time during Daylight Savings Time, but this guy was completely stopped this time. Diagnosis: dead battery.

The 24-foot big ladder doesn't get much action here unless there's a reason to put up hurricane shutters. I found it buried behind the recently packed Christmas tree, and about 20 other boxes. Took a solid 20 minutes of bike and box rearranging just to get to it. Then I had to open the garage and move the wife's car out of the driveway just to be sure not to scratch it. Yeah, I took the ladder in through the front door to avoid maneuvering extra turns.

OK. Inside, no problem, leaned the ladder on the wall, climbed up, grabbed the 50+ pound clock and came back down. Great. Not just a dead battery, but a ton of battery acid everywhere too. Damn you Costco brand! So I cleaned all that shit away very well, replaced the battery, set the time, cleaned the dust and spider webs, and made sure it worked for the next 5 minutes.

Time to put it back up. While I was hanging it, the rug that the ladder was on started to slip, which meant I was also starting to slip. Holy dangerously close to a big fucking wipeout. At least the clock was already up there. But the wife decided it was crooked. I made her hold the ladder while I went back up to rotate it one degree to her liking. Finally, I had the pleasure of reversing the process: ladder back out, back in its home, replace all boxes and bikes and clean all the dirt that I managed to stir up. The End. If you would like to witness similar exciting actions, something like that pretty much happens every weekend here.

Today I'm drinking Shiner Dortmunder-Style Spring Ale brewed by Spoetzl Brewery in Shiner, Texas. This is their newest beer. The bottle goes on to say, "THERE'S Nothing Finer THAN A SPRINGTIME SHINER!"

Floral aroma, touch of bread and a little hoppy. Big grain flavors and sweet corn start things off. A hoppy balance immediately brings this beer to just on the barely sweet side of neutral. Hint of bread, definite flower garden, hoppy. Great prickly carbonation really brings out the best this beer has to offer. While it's pretty plain and simple, the flavors are nice and this is a very refreshing beer. I could easily drink this all day long without tiring of it. Very nice! 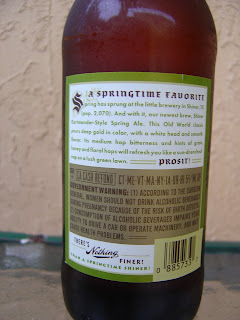 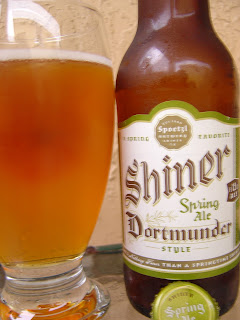 Your timing is fantastic, I just learned what a dortmunder was like, two days ago.

That's what she said. Oh, and what is it? I didn't bother looking it up.

Hello hello! It took some time to finally sit & read your post. I'm staring into the distance a lot today.

The Clock Story! Man. That that was quite the adventure huh. For something that's called 'offending monster'...it looks pretty elegant hehe. Your garage sounds similar like ours though. Only most of the stuff is from my dad. So yeah basically, it's a mess. Merci for sharing the story!

Hope you're well & talk to you later!