Hey now! Mr. UPS delivered a great present to me today. I recently ordered another Marq Spusta Dogfish print, this time the Dogfish Pimp saying "Damn!" The surprise, however, was the signed inscription by Sam Calagione. My iPhone picture sucks and I may take a better one later, but it says, "Whaddup Rob - stay sexy! Sam Calagione!" How cool (and off-centered) is that? (Update: the picture to your left is the retake, and original is below). Looks like Ed Roberts might have just been toppled as "The Sexiest Man in Craft Beer" with this one. And I can already tell he's a little jealous. LOL. Huge thanks to Goddess of Gear Lindsey and Shippy Shipperton, and of course Sam for taking the time to write something nice for me.

Today I'm drinking Wells Banana Bread Beer brewed by Wells & Young's Brewing Company in Bedford, UK. I picked this up on my rare venture to the foreign section over at Total Wine. Yep, they brewed this beer with bananas and banana flavors. The label depicts a banana being peeled, only to reveal a pint glass of this beer. We can only dream. 11.2 oz and best before 20/04/11 which makes it a helluva lot fresher than the US beer I bought on the same day.

I'm really trying to inhale the aroma here. Got my nose as close as I can, swirling and begging for bananas. It's a little fruity and tea-like but banana? Just a faint whiff on every other sniff. (The banana aroma does get slightly more noticeable as it warms, but barely worth mentioning).

Now there is definitely a lot of banana flavor, but it tastes like extract and a bit artificial, right from the beginning. The carbonation is very high and prickly right from the start as well. Yes, you will also taste bread dough to round out the beer name. Tea, band aids and newspaper are the remaining, and yes quite odd, flavors. Overall, this is a mostly boring and very bland, watery beer. (Thank God for the 60 Minute I just cracked open). You end with a dry finish. The 5.2% alcohol wasn't a factor at all. Refreshing and fruity but pretty "meh" all around. What I think you should do is buy a bottle of this beer and bake some banana bread--figure out where you can substitute it into this recipe and then report back to me! Later, dudes.

He Said Beer, She Said Wine: Impassioned Food Pairings to Debate and Enjoy: from Burgers to Brie and Beyond -- Sam Calagione 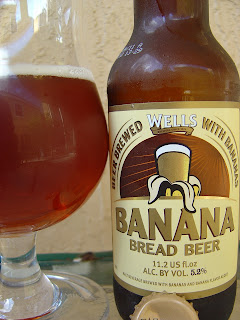 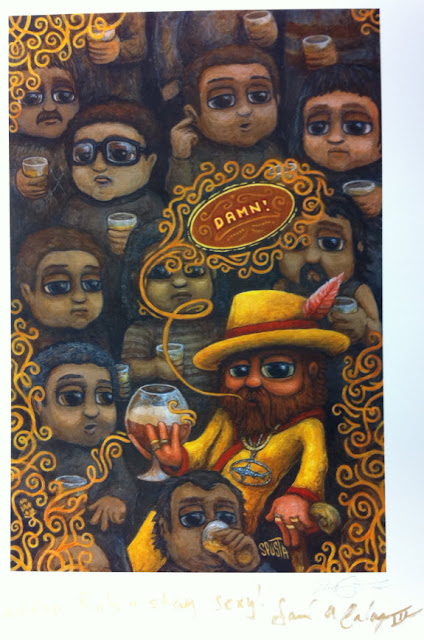 I LOVE the print!! How cool that he also wrote a little personal message. For me those little things are the best!

Banana is one of the flavors that I usually dislike in drinks, ice cream, candy or food. Oh wait I do like dishes made with plantains, like e.g. fried banana & banana bread. Awesome. In Surinam (probably also in other countries) it's a popular side dish.

Band aid? That's pretty odd indeed haha! Your recipe looks good! Need to try this one out, see if it's better than the recipe I use now.

Have great weekend & Talk to ya later!

The print is cool, same artist as the other four I showed you. But yes, the personal message was great. I'm actually not very surprised that Sam or the people from this brewery would do that, as they are very much involved with their customers in every way.

I'm with you on bananas. I like them plain, or in bread. Banana candy, yeck.

Talk to you later and thanks for stopping over here.

Yeah, this is not my favourite beer either...honestly anything with those overly phenolic flavours really turns me off. Plus I hate banana flavouring too - love bananas, hate the fake stuff.

I can see trying it on some banana bread though...if I ever get the urge to bake, I'll give it a shot ;)

Yeah, love bananas, even banana yogurt and bread and a few other things, but not in my beer!

When fruit (blueberry, strawberry) or other elements are added to a beer and are marketed that way (honey beers) I am really judgemental. It took me 10 years to find a honey beer that was perfect, Firestone-Walker brewed one for Pismo Grill. I haven't had this beer for years but I don't remember it leaving an impression on me.

I don't get judgmental on any beer except that it deliver what is promised. I guess that's what you're saying anyway. Fruity beers probably are harder to pull off if you choose to brew them. I wouldn't worry about revisiting this one, though.

The banana beer is an excellent novelty beer. I personally love the beer. I know many people who have been unimpressed. Definitely not a beer I want often, but good once a year (IMHO).

Yeah. I am pretty excited about the poster print.

I guess I'm one of the unimpressed, but I guess I can understand why someone might like it.