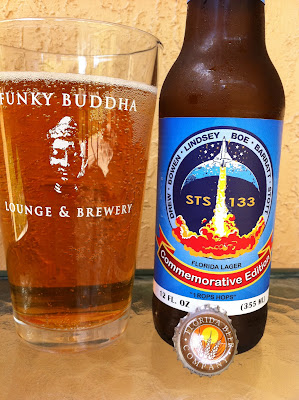 Today I'm drinking Florida Lager brewed by The Florida Beer Company in Melbourne, Florida. This was given to me by the Brewery, and I even got a nice lesson in their history from their local sales representative.This bottle is their Commemorative Edition of Florida Lager, labeled and bottled as a tribute to Space Shuttle Discovery's final scheduled mission, STS-133, which took place from February 24 to March 9, 2011. (The 133 actually indicates this to be the 133rd overall shuttle flight). Anyone know what "1ROPS HOPS" means?

Update 3/29/2011: Florida Beer sent me to this link at Patrick AFB to clarify the 1ROPS HOPS slogan. I am not sure I completely get it, but you're smarter than I am!

Fruity with just a hint of grain, and some citrus. Lightly sweet start with a touch of apple. But a spicy and hoppy answer is just around the corner. The two aspects complement each other well. Prickly upper-level carbonation adds to the overall refreshment of the beer. Nice flavors. Simple, easy drinker. The finish is dry, making you want for another. Luckily, this gift was a sixer!

Posted by Beer Drinker Rob at 9:42 AM

This comment was left and emailed to me. Not sure why it doesn't appear or why the poster would delete, but...

Dude, 1ROPS refers to the First Range Operations Group. The 'Range' refers to the Eastern Range. The Air Force operates 2 primary ranges, Eastern Range headquartered at Patrick AFB in Florida and the Western Range headquartered at Vandenberg Air Force Base in California. The purpose of the ranges is to make sure a rocket is not droppped on somebody's head (that would not be pretty!). 1ROPS is responsible for the overall management of the ER (on the Air Force side). Hope this helps, Second Generation Range Rat

That is an awesome summary. Trust me that I searched for some info, but got a bunch of confusing crap from my search. So I punted, as you saw.