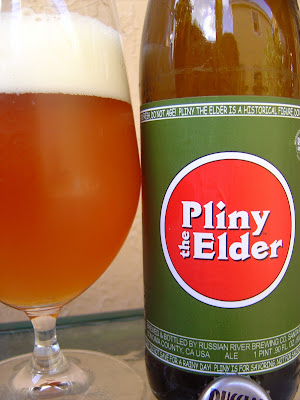 Today I'm drinking Pliny the Elder brewed by Russian River Brewing Company in Santa Rosa, California. It was barely six weeks ago as I was publishing the Pliny Guest Post by "The Girl" that I thought to myself that I may never drink this beer.

What a turn of events though in the last few days! An online friend of mine from California was going to be working at her office in Ft. Lauderdale last week and needed some fun suggestions. I really did nothing that I wouldn't do for any of my other friends--let her know about a weekly beer-sharing-get-together (that I've never even attended) and coordinated with Ed at Total Wine to ask him to help her get some Cigar City beers. Nothing really.

Well, I guess Taylor didn't see it that way as she surprised me by letting me know she left me a few beers from California at Ed's store. And when Ed opened his trunk after our Beer Extravaganza on Tuesday night, it was more than just a few, all very awesome, and this bottle was one of them. Thank you so much!!! What a thoughtful lady!

This is my second beer from Russian River. The first was so amazing that I named Supplication my favorite beer of the entire year last year! Since I am probably only one of the first people to try this beer, let me start by saying the label is so simple yet still striking. Apple Red over Olive Green. The fun part is the story and suggestions around the label.

Now I was considering aging this for a while (not), so the following phrases posted around the edge of the label helped change my mind:

Does not improve with age! Hoppy beers are not meant to be aged! Keep away from heat!


Respect your elder: keep cold, drink fresh do not age! Pliny the Elder is a historical figure, don't make the beer inside this bottle one! (so glad they didn't write "an" historical)


Not a barley wine, do not age! Age your cheese, not your Pliny! Respect hops, consume fresh!


If you must, sit on eggs, not on Pliny! Do not save for a rainy day! Pliny is for savoring, not for saving! Consume Pliny fresh, or not at all!

Luckily, mine is fresh. Bottled on 020711, less than a month ago. Nice! Finally there is a little story about the historical figure Pliny the Elder, which I've photographed for your reading pleasure! 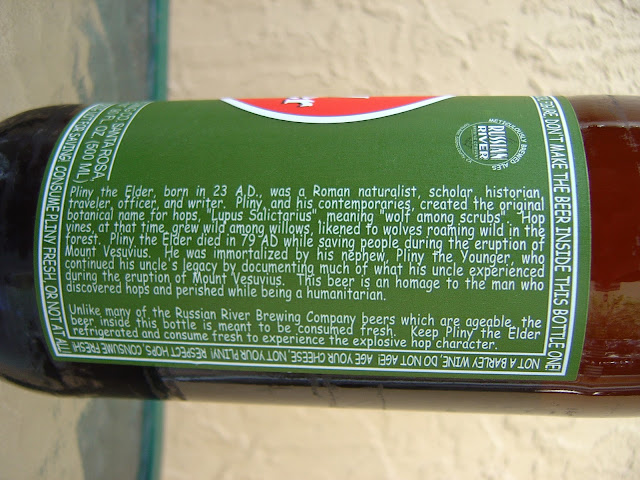 Quite a fluffy head! Pine aroma, yet fruity and tropical and very inviting. Fruity delicious start. Just the perfect amount of orange and pineapple without being overly tropical and sweet. At the same time, Pliny is hoppy with tons of pine and citrus and sports a handsome little bitter bite! The sweet and bitter is back and forth on a swing, not really balanced, but extremely complementary.

The flavors are very fresh and bright, and the carbonation right on target. Creamy. The finish is dry, and until the end you don't taste or feel the 8% alcohol. The bitter aftertaste is really pleasant and smooths out further as it fades. Damn you 16.9 ounce (500mL) bottle. I thought you were 22! World class for sure! But you already knew that. Next time I'm in California, you are mine Mr. Pliny!

Pliny the Elder's Natural History: The Empire in the Encyclopedia

Beer: Tap into the Art and Science of Brewing

OH how I yearn for a Pliny of my own...I've only had a chance to sample. It was amazing!

Yeah, It kinda just fell in my lap. Nice surprise!