Whiskeys Around The World -- Presented by Marcy Rudershausen at Total Wine

I was invited by one of the executives at Total Wine to attend a Whiskey Class and Tasting last night. Invited like I didn't pay the $15 class fee, so you know now that I will be completely biased in everything I write. I did, however, spend more than $15 before I walked out at the end of the night, so I'm pretty sure we're even. 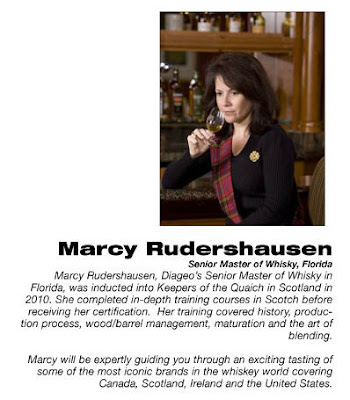 Anyway, I was the first to arrive. Big surprise. Marcy Rudershausen, a whiskey expert that works for Diageo, and Julius, an awesome Total Wine employee, were setting up the room for around 25 guests, including pouring six samples for each person. I offered to help but they were doing just fine without me. Around half an hour went by before we started 20 minutes late, typical punctual Miami time. Total Wine did have some cash register issues, which contributed to that problem, but it was mostly the 30 people that showed up late. Personally, I don't appreciate that inconsiderate behavior at all, but I've come to live with reality. We ended up with a final total number of around 50 students.

I had a few questions prepared before I got there, but using the extra time to browse through some of the literature, I found that my questions would soon be answered. Before the night, I was a complete whiskey newbie. Marcy was not only extremely knowledgeable but also a great speaker that got her class involved and interested. She explained that Whiskey is just a broad category that includes Scotch, Irish Whiskey, Bourbon and Canadian Whiskey. She also filled us in on some of the requirements that are needed to meet each of the category distinctions. What a relief I didn't need to ask those questions!

Marcy brought some materials for us to read, and others for us to smell and taste. Yes, I got to smell two different Scotches for comparison, one smoked on peat and the other not. We also got to taste barley, one smoked, the other not. Very big differences. We learned that whiskey is made from only water, yeast and grain. And we got a detailed run-down of the production process. The entire process before distillation was nicely likened to brewing beer, which was cool for me. After distillation, the whiskey is aged in oak barrels for a number of years, some by requirement, some for the impact and flavor characteristics that the oak barrels impart on the whiskey. Finally, we were told that the aging process loses 2-3% per year to evaporation, also known as the "Angel's Share". So stop asking why your 21 year old whiskey costs so much! 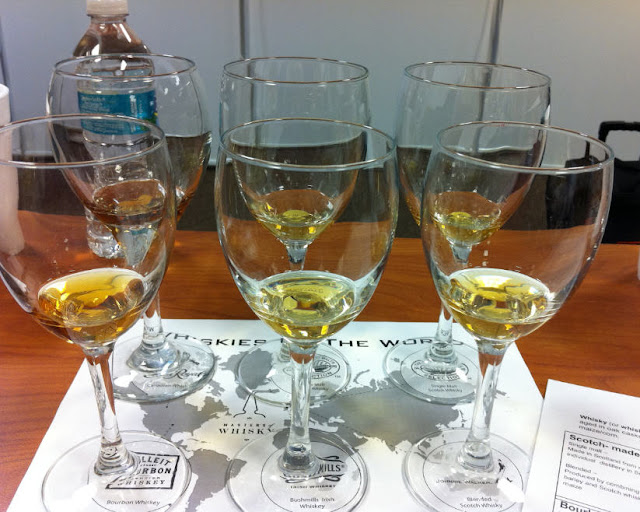 Being a big whiskey beginner, I'm going to tell you my thoughts on each of the six whiskeys we tried. We tried each straight and also with a little water added, as Marcy explained this would give the whiskeys different aromatic and flavor characteristics. Some of my notes are classroom observations, some are my own, and some were said enough times to just make me cave in and say OK.

Bushmills Black Bush Irish Whiskey. I think Marcy said these guys have the oldest distillation license in the world, dating to 1608. Light aroma, tart apple. Light flavor with hints of vanilla and wood. With water, almost the same, but certainly the alcohol cut some made it easier to drink. Marcy mentioned that she thought this is one of the most underrated whiskeys around.

Oban 14 Year Single Malt Scotch Whiskey. This was actually a substitute from the advertised listing replacing unavailable Cardhu 12 Year. Marcy didn't pick the replacement because of similarities, but rather for its appeal. First, we learned a rule-of-thumb generalization about the smokiness of Single Malt Scotch Whiskeys. If the bottle says the whiskey is from the lowlands, highlands, or mainlands, it's not going to be smokey. If the bottle says "Isle of" or something similar, it should be smokey. Again, with a few exceptions. This one happens to be from the west highlands, therefore not smokey. Malty, bread aroma. Nice fruity flavors with spicy lip burn, sharp. With water, definitely better, a little sweeter and some dude said lemon.

Talisker 10 Year Single Malt Scotch Whiskey. Marcy suggested using this to make Smokin' Mary Bloody Marys for brunch today, skip the Tabasco. I'm probably on the fence for that. We'll see. Smokey aroma. Everyone then closed their eyes and imagined a salty aroma that I just could not be convinced existed. Great imaginations in Pembroke Pines last night, folks. Tastes like a campfire, with a bunch of wood in your mouth, too. Add water, and it really took on a bit more fruitiness on the nose. Earthy, dirty, smokey, sweeter flavors.

Johnnie Walker Gold Blended Scotch Whiskey. This is their 18 year old blend of around 15 different whiskeys. Sweet aroma, a bit earthy, with honey and some smoke. Adding water, the smoke becomes more apparent.

Bulleit Bourbon. This is a Kentucky Bourbon, though being made in Kentucky is not a requirement to be called bourbon. Requirements include being made in the US with at least 51% corn, and aged in new charred oak barrels. After two years, it's bourbon, but after four years, the makers do not need to put an age on the bourbon bottle unless they choose (like perhaps if it's very old). Bulleit is a high rye content bourbon at 28% rye. Spicy rye aroma with an underlying sweetness from the corn. Sweet and spicy flavors, dry with a burn. Awesome rye flavors, spicy orange peel, some clove. With water, the aroma is very perfumy and floral. Smooths out the flavors even more, too. My favorite of the evening! I liked the sweetness. Marcy suggested a Bulleit, Lemon and Tonic BLT cocktail.


Crown Royal Black Canadian Whiskey. Marcy said that these guys have only been around since 1939, which is a very short time in the whiskey business. Crown Royal is also know for its skill in the art of blending whiskeys, with its original being a blend of almost 50 whiskeys. This was the darkest of the six we tasted. It was explained that was due to being aged in more heavily charred barrels and that heavier whiskeys were used in the final blend.Very sweet aroma, candy, syrup, spicy. Bourbonish but sweeter. Adding water smoothed it out even more. My second favorite after the Bulleit Bourbon.

Marcy wrapped up the evening by answering a handful of questions, though she'd been answering some here and there throughout. We all put our names in a bucket and Marcy gave out some prizes as well. Hats and cuff links and pens. I won a key chain bottle opener with the Guinness logo on it, appropriately. Total Wine was a great host, offering cheese and crackers and salami and grapes. I had my share.

I would definitely recommend attending a class at Total Wine, and Pembroke Pines is the perfect place for a larger class as it has plenty of space. If you see Marcy coming to your local store or area, check her out as well. I had a really nice evening and learned a lot in a fun environment.

In conclusion, I had my favorites of the evening, as I mentioned above, but I'll likely remain a beer drinker first (luckily for you) and a whiskey taster as a secondary interest. Thanks for reading and let me know your thoughts!
Posted by Beer Drinker Rob at 1:00 PM

FUN! I don't know dick about whiskey except that scotch is whisky and whiskey isn't scotch. I would absolutely take a class if it was offered though.

Well, before you sign up for the class, re-read this post because it's the Cliff Notes for what's to come. It was fun.