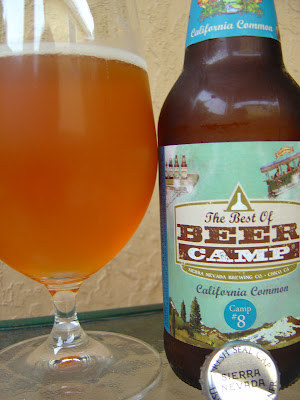 Today I'm drinking The Best of Beer Camp: #8 California Common brewed by Sierra Nevada Brewing Company in Chico, California. This is the second I've tried of the four Beer Camp beers they recently released. I thoroughly enjoyed their Weizenbock the other day. I noticed a few places equate California Common with Steam Beer, so let's go with that as a style here. The label is the same boring one as the Weizenbock, just with a different name and colors.

Hoppy, citrus, clean and fresh aroma with a faint malt in the background. Really flowery flavor start. Some nice bitter jabs pick the petals and place them around your mouth. Lemony and quite hoppy but with enough malt to balance. Clean, smooth, nice flavors. You do feel and taste the 6.5% alcohol toward the end, but it gives you kind of a relaxing feeling. Great carbonation and refreshment. I'll tell you what... I'm drinking my second already! Glad there were three of each!

Posted by Beer Drinker Rob at 8:54 AM

Based on your reviews, I'm going to look for one of these. I kind of like the label, reminds of a 60's brew.

All the labels are the same, I think. Except for name and colors.

I'd definitely check it out. I had this one and the Weizenbock, which I loved. And I also reviewed the Juniper Black Ale, my least favorite, but it's not published yet. Just the Double IPA to go.