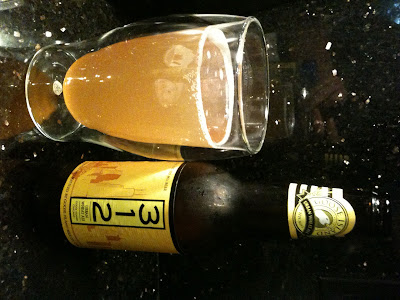 Third day in a row of guest posters? Yes, please. Today a special reappearance from Brewkkake! This guy really needs to come out of retirement on his own blog. Go check out his, um, forthright opinions on beer and other subjects and let him know to get with it.

As a native Chicagoan languishing these past two decades in the swampy, third-world banana republic known as South Florida, I was excited to find this beer (and several others) from my hometown while bottle shopping in Washington DC during my trip to SAVOR. Aside from small pours at a couple beer meetups where bottles were shared by those in attendance, the Goose Island brews I was fortunate to find in DC were admittedly my first. After a couple years in the craft beer game, few would willingly volunteer "I've never had anything from Goose Island".

Though wheat beers were the style that eased my conversion from the pee-guzzling masses, I rarely drink them anymore. However, this one bearing the name "312", Chicago's main area code, was a must-have. A number practically synonymous with the Windy City, 312 is everywhere in my memories, from old phone numbers I had, to old usernames and passwords I picked, and even my mother's birthday (3/12).

I poured this into a pint glass since my tall hefeweizen glasses disappeared at roughly the same time as my interest in the style of beer itself. It's a hazy, heavy yellow that borders on the very first shade of orange and almost perfectly matches the color of the bottle's label. A paper-thin, white head vanishes almost immediately after the pour, yet several minutes pass and carbonation bubbles continue rushing to the surface. A surprising citrus aroma replaces the banana scent I get from most hefes, with some pineapple and even a little oak, strangely enough. It's extremely light-bodied, seemingly fizzy up front but finishes dead flat. It's sort of like running your fingers through a girl's hair and inadvertently pulling off her wig to reveal a clean scalp (I'm still hoping you'll forgive me, Grandma). Not a whole lot going on flavor-wise, either. Quite bland and reminiscent of a mild golden ale or [cringe] lager. I can't blame the influence of AB-InBev's total takeover of the brewery, as this was brewed a month before then (and still well within the 180-day freshness window as noted on the label).

From when I first picked this bottle from the shelf until now, I've wished that they chose a stronger, more bold style of beer to bear the Second City's area code. But if you think about it, Chicago sits in the shadow of much bigger cities, just as wheat beers remain underlings to IPAs, stouts and so on. If you bear any sentiment to Chicago, as I do, this might be a worthwhile beer for you to try, but you'd be better off picking up one of Goose Island's many other excellent brews.
Posted by Beer Drinker Rob at 10:37 AM

The first GI beer I had was also 312, (it was at a noisy college bar with sticky floors, and the only other beers on tap were, predictably, Blue Moon, Bud/Bud Light, Fosters, Heineken. 312 was their "craft" beer.)

I was hesitant to try any others after that, but they've done a great job with their vintage series and most of their "extreme" ales are good too.

Yeah. I've had it too with that kind of reaction. I really like some of their specialty beers though. Oh Sofie...