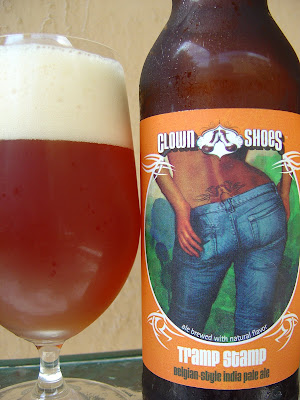 It's my fault, really I know that, for speaking up. But again I jumped into a conversation about bomber pricing and value. This time, you tell me if you think I am wrong.

Here is my statement: The only way to compare pricing on different sized beers is to do a cost per ounce. My conclusion: Almost All Bombers Are Rip-Offs!

So we were comparing this beer that I reviewed tonight, Tramp Stamp, priced around $6 for 22 ounces against Raging Bitch, supposedly being upped in price to around $12 for a six pack. I think I heard (read) that Raging Bitch was overpriced and that a really strong alternative in price and flavor would be Clown Shoes. First, the opinion part, about the beers being similar. I say drink what you like and I can even totally get behind that statement that they are comparable, I really like both.

However, now that we've assumed them equal enough quality-wise to compare, let's do the real financial analysis. Personally, I do think that a $12 Raging Bitch sixer is quite a bit steep. You get 72 ounces for $0.17 per ounce. But when you do the same mathematical genius for Tramp Stamp, you just spent $0.27 per ounce, almost 60% more.

I was then asked to compare the Tramp Stamp bomber to other comparable quality bombers. That, however, is a completely different comparison. Yes, Tramp Stamp is $2-$3 cheaper than other bombers, making it a steal and great deal side-by-side with its more expensive brothers. However, remember my statement is that Bombers almost entirely are rip-offs!

Great scientists propose solutions. Bottle all beers in 12 ounce bottles and 4- or 6-packs. I'm sure almost all beer drinkers would appreciate that. Even if you go to a place where you can break up sixers for singles and be charged a premium to do so, you still make out on the per ounce ratio. For example, let's say a single of Raging Bitch would be sold for $3 per bottle ($18 per sixer equivalent, 50% premium). You are still only paying $0.25 per ounce, which is less than the Tramp Stamp bomber, while making less of a commitment to a larger volume.

Today I'm drinking Clown Shoes Tramp Stamp brewed by Mercury Brewing Company in Ipswich, Massachusetts. Oh, so this may be one of the labels that some people are offended by. Hmm. There is chick with low-rider jeans (or whatever the cool kids are calling them these days, lolz) that is showing off a large tattoo that goes from butt-crack to lower back. I guess that's the Tramp Stamp. I don't see her feet, but I bet she's also wearing Clown Shoes, but that is up for debate.

The story on the side tries to explain the beer name with, "Like a stamp on a tramp, this brew is about not so subtle seduction." Oh, and lost in the name, this is a Belgian-Style IPA. Bottled 6/20/11.

Belgian yeast aroma is dominant, but some orange and sugary candy are very noticeable too. Sweet orange and tropical pineapple fruity flavors are prominent in the beginning. Spicy cloves with that strong Belgian yeast character layer on top of the fruits. As you have a few sips of Big 22, the fruity flavors take a turn from being candied and sweet to a more citrusy lemon and orange hoppy bitter. Refreshing change at this point which carries you all the way to the end.

The finish is dry, with the 7% alcohol taking a role. Good carbonation; chewy yet not syrupy at all. Nice flavors. Slightly on the sweet side of balanced throughout, but I'll admit this beer grew on me to the end. I liked it! Here's to "not so subtle seduction"! 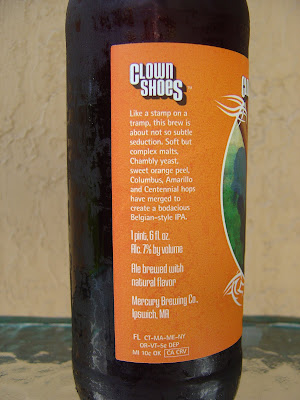 Oh. And one final comment about my example. To add a little more perspective, the $6 bomber values the equivalent beer in a 6 pack at $19.64. What was the last six pack you bought at that dollar amount? We should boycott bombers!

The Not So Professional Beer Blog said...

Hi Sanjay. I wish there were a 12 ounce option for all beers. Makes sense for the consumer in so many ways.