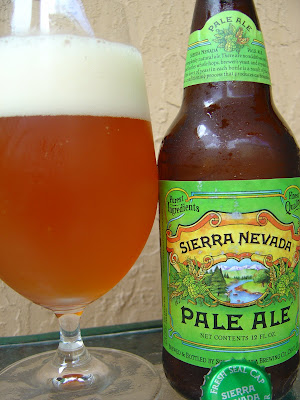 Today I'm drinking Sierra Nevada Pale Ale brewed by Sierra Nevada Brewing Company in Chico, California. I know I'm not alone, but I'll go on record as saying this is one of my absolute favorite breweries. Took a lot of balls to say that, right? This beer is a regular staple in my home. Great flavors, refreshing, consistent, awesome value, what more can I say?

Well, this is what else I can say. Over the past month or so, I've been talking about this beer more than usual. First, my wife has actually taken a liking to it and had a few glasses when she'd normally have some wine. Could this be her craft beer epiphany? I'm thinking YES, though she did have a few Hatueys last month as well. I think she digs the Pale Ale!

At the same time, another of my online friends who didn't "do beer" had a few Sierra Nevada Pale Ales and is equally in love. She told me she has a few in her fridge right now. Hey, me too! Is there anything else that could explain this recent phenomenon? Well, they are both Colombian chicks, but that's probably not it!

Online friend asked for my review and I gave her one in around 100 characters, but I was a little surprised I don't have a good review of this beer on this blog. I did do one almost three years ago, right at the beginning of this blog's existence, but it's a little weak and I'm not even going to bother linking it here.

So... malty, bready aroma with some citrus, quite pleasing. Hoppy orange and lemon citrus flavors to start. Nicely bitter but not overdone. Some grass and a touch of pine are met by just a touch of bread. Well-balanced. Excellent prickly carbonation. Great lingering aftertaste. The 5.6% alcohol may add a little dryness to the finish, but mostly it just lets you know this isn't a virgin drink. Terrific beer. Pick up a 12-pack today! 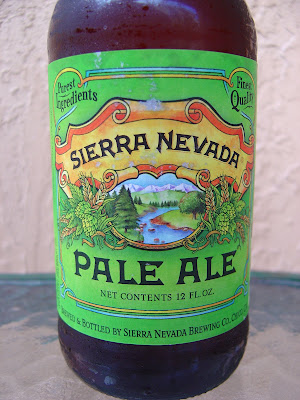 Hops and Dreams: The Story of Sierra Nevada Brewing Co.