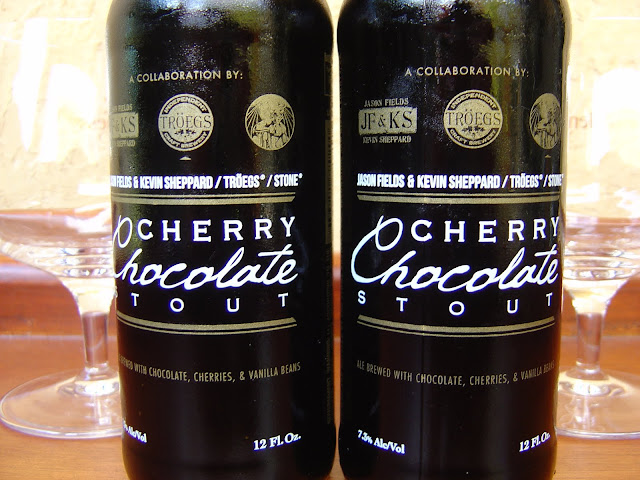 Today I'm drinking Cherry Chocolate Stout brewed by Stone Brewing Company in Escondido, California. This is a Collaboration beer between Stone, Troegs Brewing and Jason Fields & Kevin Sheppard, who apparently won the Stone March Madness Homebrew Competition with this beer. Cool. The back of the bottle has a story by John Trogner from Troegs talking about homebrewing being the catalyst fueling American craft brewers. John reminisces about some of his own homebrewing experiences. If you're desperate, I'll take a picture because I forgot the first time.

I bought a bottle of this a few days ago, and I was so excited to try it that I put it in the freezer to chill it quickly. Of course I then forgot about it, ran a few hours of errands, and eventually had to call my wife to take the rock solid beer out of the freezer for me. Oh, the shame. The bottle was not broken and the cap was not compromised, however. This scenario has obviously happened to everyone, but not usually with a limited release 12 ounce bottle. I always drink these mistakes, but they usually don't hit the blog or get analyzed too much.

I told everyone about my failure on Twitter and went on to ask for expertise about what consequences the frozen beer might have suffered. Ed Roberts of course just told me to scrap the review and called it an "Epic Failure". (In a massive fate of irony, and after I wrote this whole review, Ed accidentally froze his bottle of this beer too. I'll let him leave a comment about that.) Two other people told me that the same thing happened to them recently and they compared their thawed out beer against others from the same six pack with little to zero difference. One lady told me she'd expect the frozen beer would lose its carbonation as she said champagne does. And one guy did an experiment just like I'm about to do, concluding no difference.

I'm sharing all the data above in addition to the first-hand experiment below because Twitter Follower Stevie seemed really interested in what the responding people had to say. Anyway, I was able to grab the second-to-last bottle from my local Total Wine shelf, so all I needed to do was be sure not to repeat my freezing mistake. LOL. The only non-scientific part about this is that I didn't do the comparison blindly. That's just because I don't have any friends, at least none that like good beer. But you know what? I wasn't really rooting for one or the other to be better, so I don't really have an iron in the fire anyway. 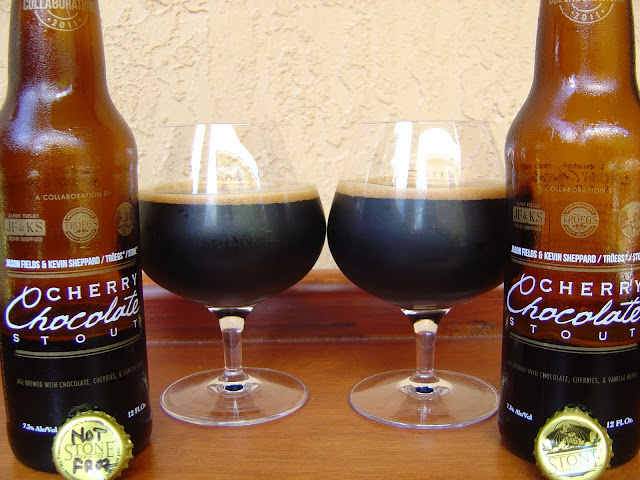 So identical bottles, identical glasses, same temperature. Not sure why but the bottle caps don't match, but whatever, that's not my fault. You can see that I was careful to label and not confuse the pair either. OK. I'm not going to type the same review twice. Sorry to ruin the fun for you guys, but these beers were identical in every way. Flavors were the same, carbonation was the same. The freezing didn't affect the beer in any way whatsoever. I don't know if extended freezing would be different or if a more highly carbonated beer might suffer more, but I'll leave that experiment for some other sucker that makes this mistake. In the end, it was the perfect excuse to drink two of these beers!

You're still interested in the review, right? Hey, don't go anywhere! Both caps had a little pop, and the head on each was small and equal. Sweet chocolaty aroma but I had to struggle to find any cherry smell. The cherry flavors are much stronger and more prominent than the aroma let on. The nicely tart and slightly acidic cherry matches perfectly against the rich chocolate flavors, complementing one another. The cherry flavors are really juicy and brought to the front by the 7.3% alcohol. Very much Maraschino cherry in flavor, which kind of makes me wish I had paired this with a bowl of vanilla ice cream.

Toward the middle, some lightly bitter coffee flavors and faint hints of vanilla add extra interest before you end with a dry finish. The beer is balanced nicely and is tart more than any bitter or sweet. Carbonation is low but fine; body is medium. The cherry flavors at times feel a little medicinal, especially in the aftertaste, but that is a minor negative and doesn't stop me from saying that I liked this beer quite a bit. Flavorful and interesting all around. If you find it, check it out.

Good to know that freezing a beer doesn't really have any effect. Of course, the only time I made this mistake, the bottle exploded in the freezer, and the whole thing looked like a scene from a horror movie.

At least in this case, it was ok. Though it's probably not recommended b/c of what happened to you.

This has happened many times to me, but it's usually a Sierra Nevada Pale Ale or Sam Boston Lager. Both of those will pop their tops, in my experience, but no bottle breakage.

As for the caps, Stone has 3 or 4 caps that they rotate through, so in a case, you could end up with all of them on different bottles. They are completely random.

Hey Jeff. Yeah, I figured it was something like that. I was surprised at first glance though.