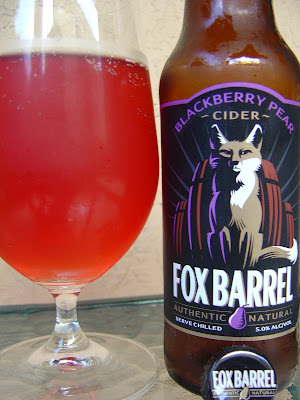 Today I'm drinking Fox Barrel Blackberry Pear Cider made by Fox Barrel Cider Company in Colfax, California. This was a sample provided to me by Crispin Cider, which I'm told owns Fox Barrel. There is a fox on the label guarding a barrel, presumably containing this cider. The purple pears and purple shadows on him let you know that this cider is infused with blackberry juice.

The story on the side goes into detail about how this cider is made and makes sure you know this is cider fermented from pure pear juice, not concentrate. The story ends with an expression that I like... "Refreshingly Adult". Also, the nutritional facts are published. Gluten free.

Pinkish red color reminds me of a soda. The aroma is full of great blackberry tart and tang scents. Blackberry tart flavors explode in your mouth right from the start. The pear seems to be more of an afterthought and in the background, but it is noticeable at the conclusion of each sip. The pear also leaves some texture interest behind on the palate, a little dry and pulp-like. Sweet yet tangy pop, over and over. Quite refreshing and nice to drink. The 5.0% alcohol is noticeable but incorporated well--you know it's a hard cider. Grab this one. 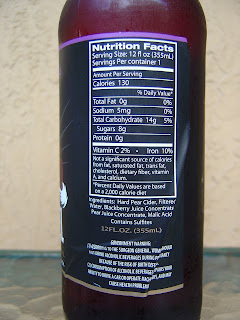 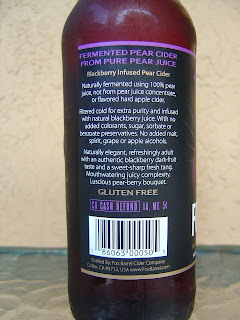