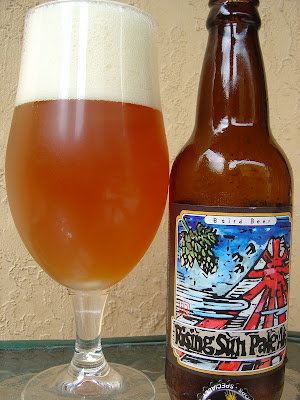 Today I'm drinking Rising Sun Pale Ale brewed by Baird Brewing in Numazu, Japan. I never would have purchased this beer if I hadn't recognized the Baird name from their Japanese Green Tea IPA collaboration with Stone Brewing. In fact, even after I had pulled the beer off the shelf at Total Wine yesterday, it wasn't obvious whether I would be able to purchase it.


You see, the cash register and the Total Wine system said it wasn't for sale as a single. After I pointed out that it was on the shelf in singles, that Total Wine sells all of its beers in singles, and that Total Wine has never sold a $30 six pack in the store's history, I got some resistance. But a manager's key was eventually used to do $30/6 manual override until they figure out the unit price. They even had me call Ed Roberts to see how much. LOL. Anyway, $5 for a 12 ounce bottle is still pretty much a ridiculous price. I mean, I'll pay for a Japanese product and the cost of delivery to Florida if I can't get something similar here and it is superior, but... Well, let me make sure that's not the case here.

Cool artwork which has the rising sun incorporated into it. On the side is a little story about the beer and Baird Beer and their location at the base of Mount Fuji. You can read it below. 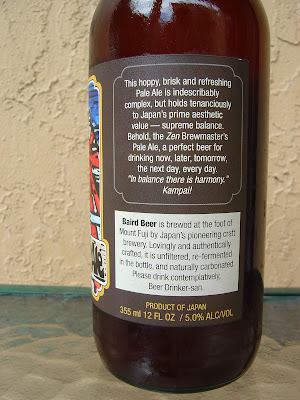 Big head. Citrus, pine and bread dough aroma. Hoppy and fruity citrus, quite bitter in the beginning. Lots of pine, very spicy, lemony, grassy. Yeah, it's really bitter. There is eventually a gentle nudge from some bready malt and faintly sweet orange, but make no mistake who's in charge in this beer. Toward the end, there is a large bite at the palate. It's only partially from the 5.0% alcohol, while the big carbonation, aggressive hops and huge spiciness all are contributing alongside it. Dry at the end.

Not bad but for sure aggressively bitter. The price doesn't justify a purchase of this beer. The US has many awesome American Pale Ales that are better than this one and cost one quarter to one third the price. Great for Japan but not worth shipping all the way here.