Tonight I was filmed for my first internet video. Well, there are others, but this one I am proud of. I was invited to the very cool By The Glass Show for their Barrel Aged Beer Feature Show. I arrived early. Arriving early is so totally underrated, especially here in South Florida. I got to rap with the crew for a bit before starting. Host Brett Hubbard, co-host Jason and Santa at the controls. Of course, Ed Roberts set the whole thing up, including the amazing call-in guests, while also providing some kick-ass provisions, which I'll get to in a bit!

Big Show. All Barrel Aged! Innis & Gunn Original Oak, Crispin Stagger Lee Hard Cider, Russian River Supplication, and Sam Adams Utopias! Are you fucking kidding me? NOPE! A lot to do in an hour, so we got started drinking right away. This may seem a little long but it includes 4 beer reviews and commentary about phone calls from two spectacular guests. So deal with it!

Innis & Gunn Original. I had their Rum Cask prior, but after much discussion we figured out this one was a bourbon oak aged beer. Muted aroma, malty. Vanilla is strong, a little buttery, a pretty light Scotch Ale. Very smooth, and I heard the extremely accurate "Cream Soda" description. Everyone enjoyed it, though I know there are richer examples that are more interesting. 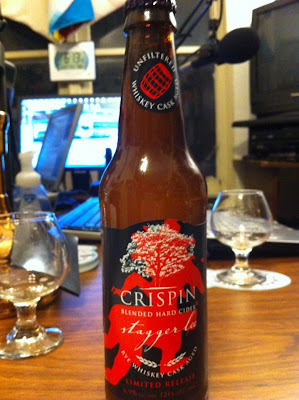 Hurry Up! Joe Heron, owner of Crispin Ciders, is on the line. Let's get that cider poured! Yes, we're drinking Stagger Lee, named after the famous song. I listened to about 800 renditions of it on YouTube today, but think the Grateful Dead (Jerry has hair) version was the best. Not the easiest to understand, but the best, LOL. Joe told us there is lots of Rock n Roll at Crispin and that they like to have fun. A very entertaining guy, extremely passionate and knowledgeable. Juicy apples, sweet cake, and a whiskey that lasts. Pretty interesting. Spicy with obvious spirits and a nip at the palate not to forget. DRY! Very nice.

Russian River Supplication. Ed sent this one. It was my #1 beer for the entire year of 2010, so of course I was totally psyched to try it again, considering its total unavailability in South Florida. Sour cherries, wine-like from the aging on Pinot Noir barrels, tart, awesome. Very dry start to finish. Vinnie, if you're reading, send me a few for Christmas! 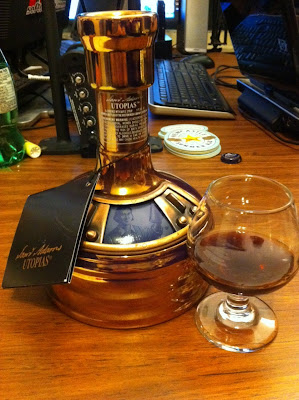 While we were still drinking Supplication, Boston Beer Brewmaster Bob Cannon called in, one minute early. Again, as suggested above, that's the way to make shit happen. Don't arrive late! We finished our Supplication and got out the prize of the evening: Sam Adams Utopias. The store manager at Total Wine offered me a bottle around 6 months ago, for $200-ish for a 750 mL bottle. I can't remember the total damage, but that is way the hell out of my budget. I do accept gifts though, so keep that in mind.

Bob was awesome, from the unmistakable Boston accent to his terrific story about progressing from operations to keg washing to master brewer. When he heard I had a beer blog that reviewed a craft beer daily, he wanted in, though I'm not sure suggesting it as a volunteer role closed him. I did mention The Vixen Chocolate Chili Bock was a favorite. Brett had Bob speak about the barrel aging program at Boston Beer, which has been going on for decades. Very interesting. He's probably gonna get in trouble from Jim tomorrow for telling us about the special program scheduled for the next Utopias release. Sorry to spill the beans, dude. LOL.

Wow! That's about all I can say about Utopias. This bottle belongs to Ed, so we handled with care, meaning a small sample each. But that was all that we needed. Let me tell you how intoxicating the aroma is. You could probably sit there for an entire afternoon and just smell this beer.

Rich toffee flavors and a unique nuttiness are overtaken by some superb raisiny flavors. So spectacular and awesome. Vanilla, sherry and nuances from the wood barrels that made up this blend. Honey with heat but not burn from the 27% alcohol. This is one of the best baskets of flavors I've ever tasted. Forget about pairing this beer with food. Take a few ounces and sip for an hour. So luscious. $200 for 25 ounces? Well, I'm waiting for that raise just like Clark Griswold in Christmas Vacation. Or a generous endowment from viewers like you!

I would go back to the show anytime. It was a lot of fun. Here is the entire video. Joe called in at around the 15 minute mark and Bob around the 39 minute mark if that's helpful. Merry Christmas!