By The Glass Show -- Breweries with Micro Distilleries 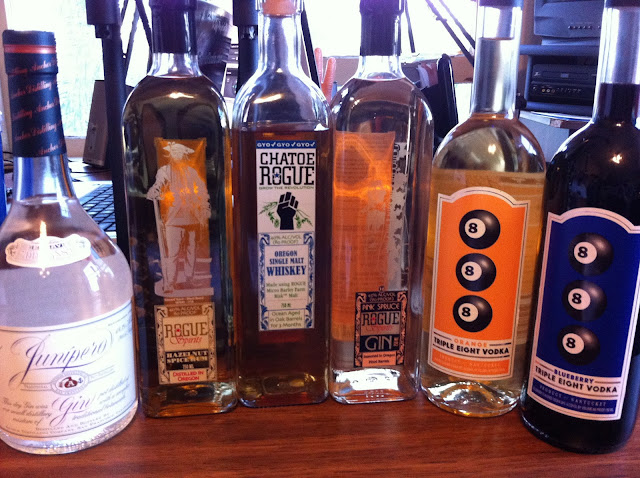 Guess what? Less than one month after my initial appearance on the By The Glass Show, I was invited back. I guess the crackers I took last time led these guys into a false sense of security about my potential!

I arrived early, again. No crackers. This week, our topic is Breweries that also have Micro-Distilleries! I was early enough that the conversations we had would have been enough for at least 20 minutes of awesome show material, but as you'll see, we made do with what we had during the show. Finally, the Cornell Chemistry degree came in handy when I suggested that the federal law making home/unlicensed distilling illegal is pretty important. Death should not be a by-product of booze and no, this is NOT the equivalent of home brewing. Jason found that you can distill your own gasoline, which I guess is the loophole into illicit booze-making. Captain Anarchy, however, commented that this show only approves of "licit" booze making. Yes, I know it's a real word, but it still sounded funny.

Our first call-in guest confirmed a lot of those details. David King, the President of Anchor Distilling Company (yes, of the Anchor Brewing family), called just a few minutes after the show started. Also on time. David offered an awesome interview with perspective and interest throughout. 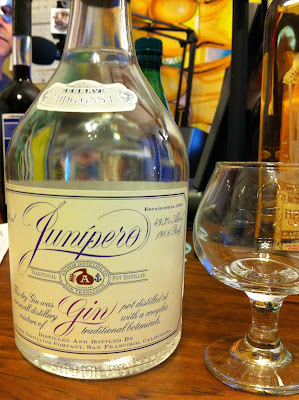 David spoke about how Fritz Maytag is not only one of the grandfathers of Indie Brewing (no he didn't use that word), but how he is THE grandfather of Artisanal Distilling. He stressed that NO ONE was doing this type of spirits making in 1993, legally, and that Fritz even needed to hire an inexperienced craftsman to help create the initial still. Pretty cool stuff.

Brett asked a pretty cool question about the spirits' names, considering we only had their Junipero Gin. David confirmed several are named after local San Francisco interests, but also admitted that they have some double fun with the Gin we were drinking. Apparently, Junipero Serra (with that Spanish Y for J) founded San Francisco while Junipero (with your hard J) is Spanish for Juniper, a key ingredient in Gin. Anchor has fun and they let people pronounce it either way, relishing the PR-making opportunity.

Why indie distilling? The most interesting answer was that brewing and distilling start with the same raw materials, offering an easier entry into this new realm that might otherwise be pushed aside. We thought he might say Fritz needed something new to challenge him, but I didn't hear that. Brett asked about other ingredients, and David offered that the oranges from Spain offered an awesome rind, not bitter like we may find here in the US. So we have Juniper and Orange Peel of the 12 botanicals in this gin. I asked for a few hints to the other 10, since I'm trying to steal the Krabby Patty Formula, but I got shut down with an "I might have to kill you" reply. LOL.

Let me offer some awesome facts you may not have known (because you weren't watching/listening)... 1. Juniper berries are a great diuretic, and offer some medicinal properties. Therefore, some of you should become Gin drinkers, you old farts. 2. Distilling includes the Tops (liver failure/blindness), Middle Cut (drink this), and Ends (drinkable, but oily and undesirable, with flavors bad enough to make you never buy again). Besides the aromatics, determining this middle cut is the true craft. 3. If you see 80 proof booze, it's mass produced. David said ideal is 92 proof and identified an artisanal distiller. This gin was even a little higher, as they didn't do any chill filtering to this gin. While Anchor makes a handful of spirits, Junipero is the only one you'll find with any distribution.

David was awesome! Took half the show before we knew it. We were mostly ears. What do I think about its flavors? Hell yeah, I tried it! I think Brett even said on air I was in my third pull. LOL. Captain Anarchy took a few extra pulls, too, including a flask fill after the show. It really was that good.

Awesome aroma, juniper, orange, floral, citrus. The citrus and orange flavors in the beginning were terrific. The juniper was obviously noticeable, but sweet orange added so much to the profile. Excellent. Very smooth, good heat. Until today, Gin to me meant either Snoop Dog or when my little brother stole a bottle of gin from my parents' liquor cabinet, also drinking it neat with his buddies at the teener baseball field. Was UGLY! This, my dears, was a fabulous drink. 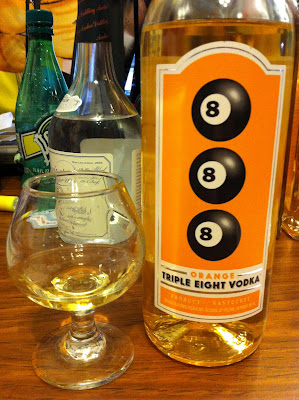 No sooner did David hang up than we were talking to Pete Burke, an executive from Cisco Brewers and their Triple Eight Distillery. Though Pete is based in Nantucket, he's no dummy and spends some winter time down here in South Florida.

Pete offered a little history of the distillery. They originally wanted to start making whiskey, but whiskey takes a long time to produce. They opted to make flavored vodkas instead, as the turn-around time to making a profitable product is fast. We were provided their Orange and Blueberry flavored versions.

The relative speed with which a vodka can be made is not indicative of an inferior product, however. What makes a great vodka are the quality ingredients used, as with any product. Pete identified the awesome water available in aquifers deep below the ground in Nantucket as one of their ingredient highlights. As these are flavored vodkas, he also mentioned Peruvian Honeybell Oranges and some local sweet blueberries they use as stars. 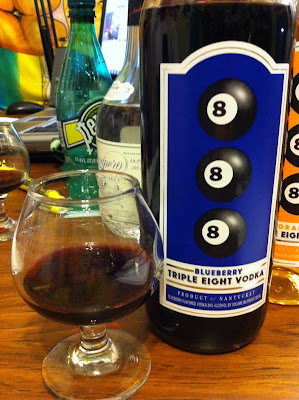 Interesting facts. All those oranges need peeling. Enter Triple Eight Groupies, who get paid in screwdrivers. Their facility in Nantucket also has what is affectionately known as the Triple Crown Tasting Room, which offers some of their beers (I announced my fondness for Grey Lady), wines (yes they also make), and spirits. Brett asked Pete about the alcohol content being below 80 proof, especially considering our earlier discussion. Because of the orange and blueberry solids added, limitations on the alcohol percentage came into play.

We tried both the Orange and Blueberry flavors. The orange vodka smelled nicely of oranges, unsurprisingly. The taste was fantastic! So smooth. Spectacular orange and melon and tangerine, so delicious. The blueberry had a nice aroma as well. Sweet blueberry flavors were dominant, though you for sure know this is vodka. Perhaps a little too sweet. Orange was a unanimous winner in our group. 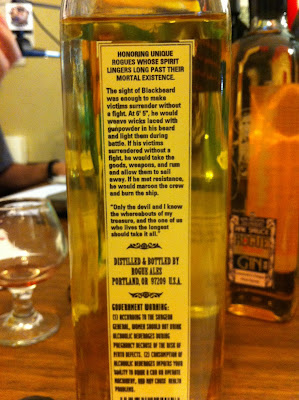 Two great interviews later, we were left with 5 minutes in the show and three spirits left from Rogue Distillery. What to do? I thought maybe we could power through a few, but Brett made us choose one. Since we already had gin, we chose the Hazelnut Spice Rum as it sounded more different that what we may have had before. No offense to the single malt whiskey, however. You can see a picture of all three above. Unfortunately, I only got a close-up of the back of the Rum bottle, which talks about Honoring Unique Rogues like Blackbeard, who is depicted on the front of the bottle.

Hazelnut aroma and nice hazelnut flavors too. Orange and hints of vanilla worked really well with the nutty flavors. Great, and I sipped for a while after the show ended too. Jason tasted some coconut in the rum, but then we realized it was the Samoa Girl Scout Cookies we were eating that provided that flavor. Mmm. Munchies!

There was some initial talk about mixing these spirits, but that never came to fruition. We drank everything neat and at room temperature.

Great time! I think I may even be invited back as a regular. Be sure to leave a comment here as to why that should be the case!

Do I get credit for "indie beer/brewing" or did someone else beat me to the phrase?

I don't know about the spirits above, but New Holland makes some nice spirits, particularly their Knickerbocker Gin and Brewer's Whiskey.

I told you I was going to steal it and start using it liberally. The credit is yours. I don't like "craft" though I use it sometimes just to fit in. I also applied it to the spirits, like Indie Distilling and Indie Spirits. I figured why the heck not?

Thanks for stopping over.