This past Saturday, I took a spirits class at Total Wine in Pembroke Pines called Bourbon Essentials: Discovering America’s Spirit. I was invited to the class by Total Wine's Product Education Manager, asked only to give an honest opinion of this lesson in their spirits education series in exchange for a free pass at the cash register. That's clear enough for you geniuses, right?

So Bourbon. Hmmm. I took an awesome Whiskey class a year or so ago with Senior Master of Whisky Marcy Rudershausen. This class, however, wasn't as popular--I guess people just don't give Bourbon the respect it deserves. Anyway, the class size was small, and most of the other students had also taken a recent Scotch class, so they knew each other. I arrived first and sat in the nerd seat right up front.

Our teacher for the afternoon was Jason, a manager at the store. How was he qualified? Total Wine education and more importantly (for me) he said that this was his favorite spirit. He was clearly passionate about Bourbon and used a book called World Whiskey (Amazon Affiliate Link) to supplement the slides provided by Total Wine--basically he wanted us to know more about the specific distilleries and show us photos of the them as well as special bottles not available everywhere.

Let me tell you about the Bourbons we tasted. We tried nine, while learning about the spirit, the rules for making it, and how to judge a wide spectrum of different offerings. So... Bourbons-- 51% corn minimum, aged in heavily-charred oak barrels, and made in the United States. Speaking of those barrels, you know what happens when bourbon makers are done with them? They sell them for 70-80 cents on the dollar to Scotch makers in Scotland (and to a lesser extent to brewers that like to ruin awesome beers with bourbon barrel aging!)

1. Colonel Lee. For the record, "Colonel" is a word that pissed me off as a kid. Couldn't spell it, thought Colonel was spelled Kernel. I mean, duh! Anyway, nothing to do with this Bourbon. Colonel Lee is the value buy at $14 for a 1.75L bottle. No marketing, plastic packaging, yet pretty decent. Honey and maple syrup tones, especially with a few drops of water.

2. Paddleford Creek, 83 proof, small batch. This bourbon is much mellower and smoother than its buddy Colonel Lee. Not as rich and lighter in color, yet easily much better quality. Nicely sweet, plenty of oak flavors.

3. Watkins Select, 80 proof. Spicy and oaky flavors, I tasted orange. Someone said "close to Beam" to which Jason nodded. I personally wrote that it wasn't as good as the other two so far.

5. Jim Beam Devil's Cut, 90 proof. So basically this is the counter to the Angel's Share, the amount of booze lost to evaporation each year. Beam says they can wring out the bourbon absorbed by the wood in the barrels, making this spirit. Rich color and rich flavor, very nice. Vanilla with plenty of oak. With water, much fruitier with peach and apple flavors, much more floral too. Very nice.

6. Woodford Reserve, 90.4 proof. This bourbon is made by the oldest yet smallest distillery in Kentucky. They triple distill their bourbon, which is one more time than the normal standard. Woodford is a bit experimental in the way they finish many of their bourbons. Basically, they age their bourbons in additional barrels to add different characteristics. Like wine barrels. Sweet, really nice. The 70% corn really adds a nice sweetness. Spicy and fruity too. Builds on itself until it really peaks to a great burn at the end. With a little water, vanilla, oak and some fruit.

7. Hancock's Reserve, 88.9 proof. Every time I hear "Hancock" I think of a guy that lived in my freshman college dorm. We said "Hey Cock" for 4 years each time we saw him. So glad I (sorta) grew up. This is a Buffalo Trace product, obviously cared for in a way their standard fare isn't. Really rich. Sweeter and softer than the rest, less burn. Corn sweetness, brown sugar, maple. My favorite so far.

8. Basil Hayden, 80 proof. More rye and more spice. This was the most expensive bottle of the night at $40 per 750mL. It also had the best aroma, fruity with honey, very pleasant. Really smooth too. Spicy with sweet corn, rich. Add a few drops of water and the honey and floral flavors really shine. Second best of the night after Hancock's Reserve.

9. Bulleit Bourbon, 90 proof. This one is 95% rye. Had a bit of a cola aroma. Quite spicy and peppery with some sweeter tones underneath. Smooth. I liked it.

In the end, my favorites were Hancock's Reserve > Basil Hayden > Woodford Reserve = Buffalo Trace. Jason was a knowledgeable presenter and adjusted well to a small class. The fact that he enjoys this spirit personally showed through with his enthusiasm. I'd definitely take more classes from Total Wine. I think my wife wants to try the "Malbec and Other Sexy Wines of South America" class in April. There are many options for spirits, wines and beer, so check out the Events Tab of your local store. 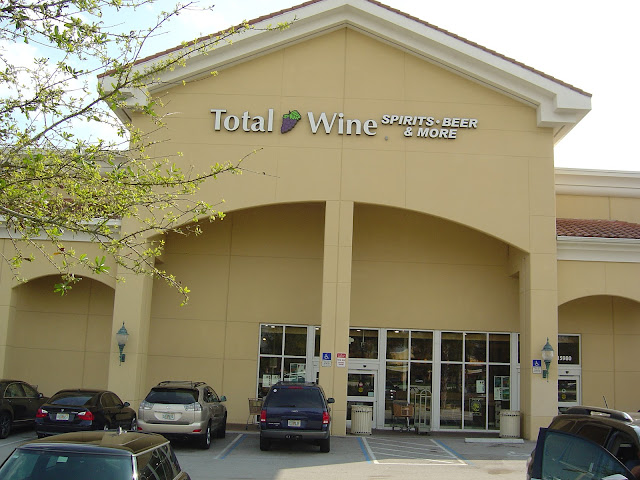 That sounds like fun. Wish our Total Wines did bourbon tastings. You had some there I've never heard of.

I never heard of half of the ones I tried that day. Your Total Wine doesn't have spirits classes? I bet they do unless there are legal hurdles. Ask @TotalWine to find out.

Bulleit Rye is 95% rye. Bourbon has to be 51% corn. Did your bottle have a green(rye) or orange(bourbon) label?