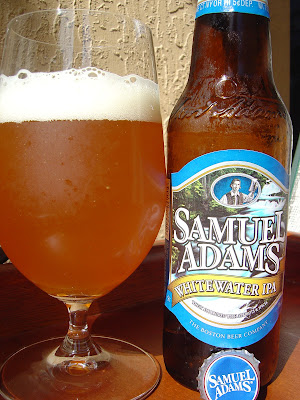 Today I'm drinking Samuel Adams Whitewater IPA brewed by The Boston Beer Company in Boston, Cincinnati or Breinigsville, Pennsylvania. This is a wheat IPA brewed with apricots and spices. That's pretty interesting. The label shows a rushing stream hidden in the woods amongst some trees and giant letters and banners that spell SAMUEL ADAMS WHITEWATER IPA. Enjoy before August, 2012.

Orange citrus and faint apricot aroma. Also wheat and sourdough bread. The flavors begin much the same. Orange citrus and pine are very prominent and dominant in the beginning, but the bitterness level is something you may not have guessed by the bouquet. This is really bitter, like chewing on a grapefruit rind. The wheat is also plays a big role, flavor and texture-wise.

There is a sour, doughy, malty aspect that tries to balance out the bitterness, but instead it is a little unpleasant and enhanced by some upper-level, aggressive, biting carbonation. A bit puckering and astringent. And a dry 5.8% alcohol finish--I was surprised the content was that low for as much as it showed. Not terrible and I really was in love with the combo idea this beer presented. I just didn't think it tasted that good.

Posted by Beer Drinker Rob at 8:53 AM