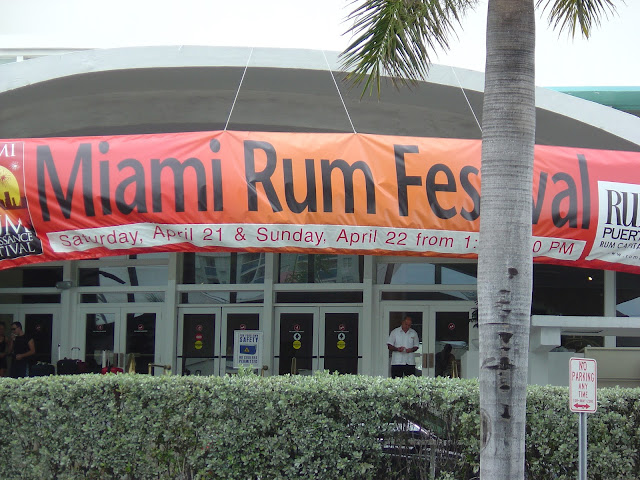 A few days ago, I checked out the Miami Rum Renaissance Grand Tasting at the Deauville Beach Resort in Miami Beach. There were hundreds of different rums to taste from dozens of rum makers from better than 15 countries. I wrote a recap and posted a photo album on SoulOfMiami.org as well. What I intend to do here, though, is to have a few laughs, tell a few stories, and review some of the best rums I tasted. 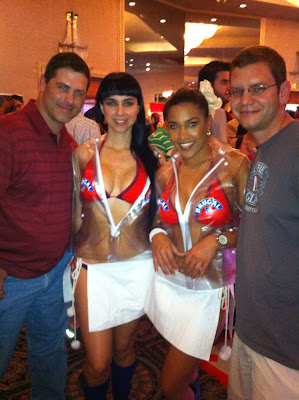 My date for the afternoon was Ed Roberts, who had an extra ticket and knew I'd be a good Goose to his Maverick! Go Follow Him Now! We arrived fashionably on time, which means 15 minutes early. You guys should try that sometime. So this is going to be long. I hope you enjoy the stories and hottie photos to break up the monotony!

After a quick look around, we started checking out the rum booths one by one. Our first rum was Zaya from Trinidad. Funny as I believe it was last alphabetically. Rich and sweet, with a really nice dose of vanilla. Enjoyable and memorable, even after a long day. The guy there made us a mojito, too, and it was really good. Looks like a dangerous day!

It was suggested to me online that based on the entire list of rums available, I needed to check out the Brugal 1888. Luckily, Brugal was right across from Zaya. After getting a photo with two of their rain-prepared, bikini-wearing models, I grabbed a shot of the 1888. It was fairly hot with some nice spiciness and wood. Interesting but not a favorite of the day. I did, however, enjoy the Brugal Lounge and the attention paid by the lovely ladies.

Shortly after that, we approached One Barrel from Belize. I think the guy had some cocktails prepared, but that was when I made the executive decicion to just try "the product" as the industry people were calling the straight rum. This rum was awesome! It had an amazing aroma of molasses and butterscotch. The flavors really followed and this was definitely the most unique rum of the entire day. Rich, great flavors, sweet and warm. Lovely to sip. 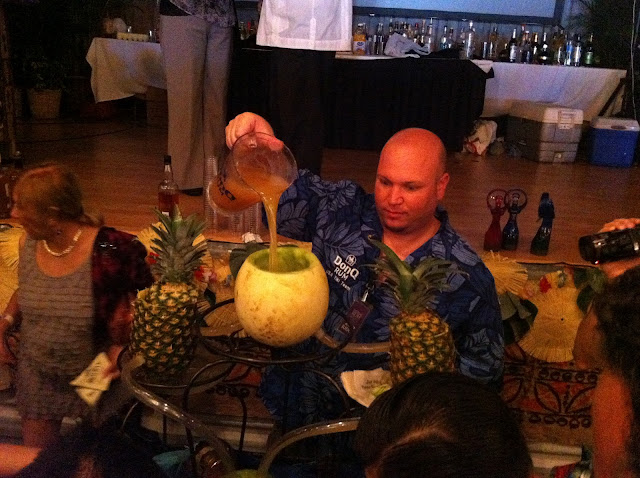 Next, a hot chick from St. Lucia flirted with me after I made a comment about her St. Lucian rum. Then I tried to flirt with a beautiful woman from Medellin over a blinking shot glass. Up next? A quick rest in the Brugal lounge to cool off. I was seriously sweating.

That's when I happened upon the Centenario booth where Ed and I tried both the 20 and 25 year old offerings. The 25 year was exquisite! Smooth with brown sugar, spices, vanilla and an unmatched buttery richness. Mmm. So delicious!

Not too much later, Ed and I stumbled into Bohemio's booth. This Panamanian distiller had several offerings. We started with Bohemio 15 which was terrific--vanilla and spices and wood while still remaining sweet. Mmmm. That is when we tried the Bohemio Honey, a 20% alcohol liqueur made with Bohemio 8. This was such a treat! Authentic and fabulous honey, sweet yet not overdone, great balance, vanilla, a star!

Next up. Madagascar's Dzama Rhum. We were told vanilla was prevalent on the island and that was clearly no lie. The "typical" offering Cuvee Noire Prestige was dominated by vanilla. Then I tried the next one called "Vanilla". Hello vanilla overload. And their overproof 104 was just a bit too hot. 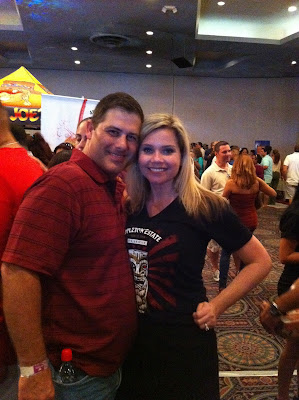 That's when Ed and I finished our first mini-circle and wound up right near the entrance. And I was again face-to-face with one of the Appleton models that clearly recognized me as I did her. This time, we got together and talked it out. After some discussion, it should have been more obvious that she had worked for my Total Wine until fairly recently. She always asked me if I had tried the newest beers and my opinions. Very cool. The best part about our discussion was when Ed let her know who he was. She left him with an unforgettable zinger moment. Haha. So awesome!

Speaking of the Appleton rum, I gave up my identity to another model collecting email addresses. Not sure what I'll be getting. Perhaps a trip to Jamaica? Appleton was clearly pushing their cocktail, which by the way was terrific and one of the best I tasted. But I also asked for a sample of Appleton 12 and loved the spicy, fruity and smooth flavors. Really nice.


Next up, Poesia, a Cachaça from Brazil. We didn't at first realize this wasn't rum. I'm actually still trying to figure it all out, the classifications. What I do know is that the aroma and flavors were awesome and quite unique. Vanilla and something else hard to describe. Along with the great beverage, a beautiful Carnival-going woman with almost no clothes was willing to have pictures taken, pose with the beverage, and let me read her belly. No shit! Even as I took crappy iPhone photos, she was cool with retakes until I was able to get a good shot. 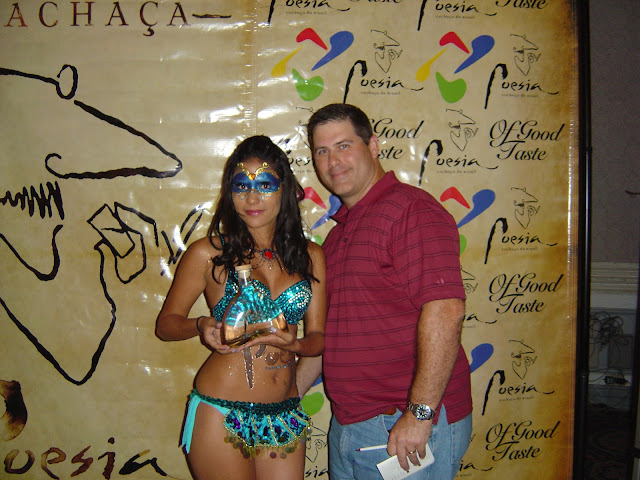 That's when we hit the Dos Maderas display, which had some barrels cut open for our sniffing pleasure. So these rums are "born in the Caribbean" yet are products of Spain where they are finished in Sherry barrels. The PX 5+5 was the best rum of the day, and I had a healthy "seconds" of that one. Sweet brown sugar, vanilla, sherry, smooth and rich. I loved it! Dos Maderas also had one of the best marketing campaigns as one of the staff tried to have each visitor have their photo taken with their barrels in the background. After the show, I found the distillery on Twitter, and while expecting nothing, I received their first two tweets in 7 months. You guys should go follow and engage them! 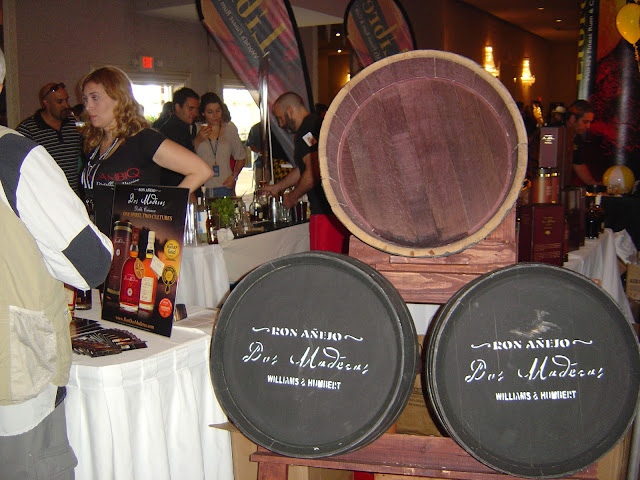 Venezuela's Rum Diplomatico was next door and their 12 year old rum was rich and yummy. Excellent flavors, and a huge leap above their 8 year, which we also tasted. 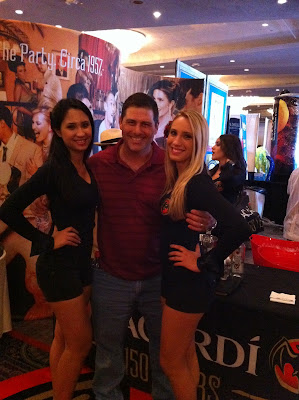 We tried a few others, including Bacardi's Solera, which was a good and smooth rum. Bacardi had an awesome booth, highlighting their history, serving rum directly from a barrel, and of course the hotties. Yes, I took advantage of the photo op. And I know it looks like my hand did a reach around on the pretty blond, but I really didn't. I did see boobs, but Bacardi was not the place.

A few booths later, we met up with the Siesta Key rum makers. Ed knew these guys as they were guests on his ByTheGlassShow.com fairly recently. OMG, their spiced rum was super awesome! Cinnamon, rich, terrific spices. I wanted to make out with it! So if anyone you ever talk to EVER says Captain Morgan, you should make them walk the plank. This kills that rum by 100 times at least!

Rum. Rum. Rum. Rum. A guy called me "Bloke". Rum. Rum. Finally we hit Zafra, which I had fallen in love with at the SoBe Swine and Wine Event, where I had around an entire bottle. Would it live up to my memory and expectations? Buttery, rich, sweet yet spicy, awesomely smooth. Yeah, a great rum! 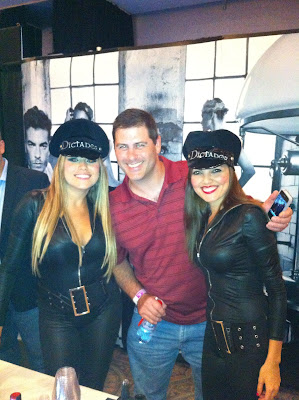 We took a break for lunch. I asked what the "imported beer" option was. Corona. Horrible dudes!

Vizcaya 21 was a nice rum and the Vizcaya White was also pretty nice. And we tried a lot more too. Prichard's, Botran, Dictador and Plantation all were memorable. 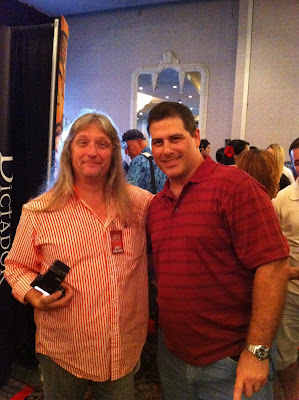 Toward the end, I met James and Annette from Soul of Miami, where I also contribute some articles, as you saw above. I also met Rob from Rob's Rum Guide, the organizer of the event. Ed made a bunch of contacts both for his business at Total Wine as well as for his role in talent management for ByTheGlassShow.com.

We left a little before closing, when everyone started dancing. And we found a place across the street called Muncheez if you can believe that. This place charged me $14 for a burger and soda and I was skeptical until I saw the size of that thing. Holy Moly!

That's it, Dudes and Dudettes. I hope I'm invited back next year! You should totally check it out! 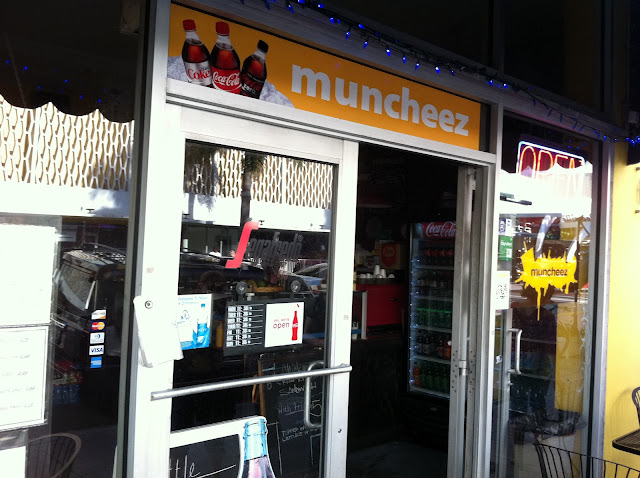 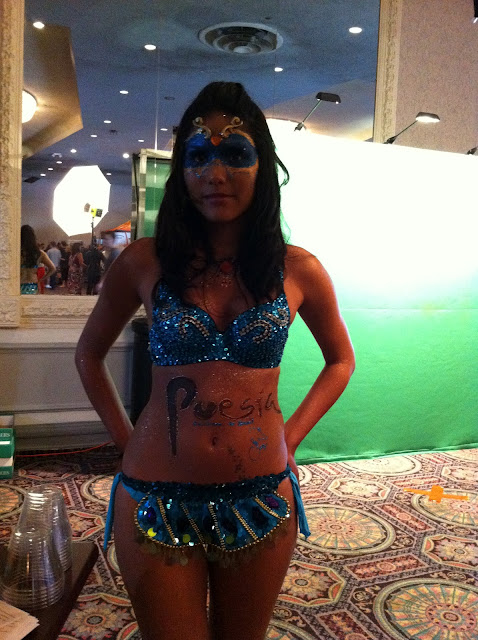 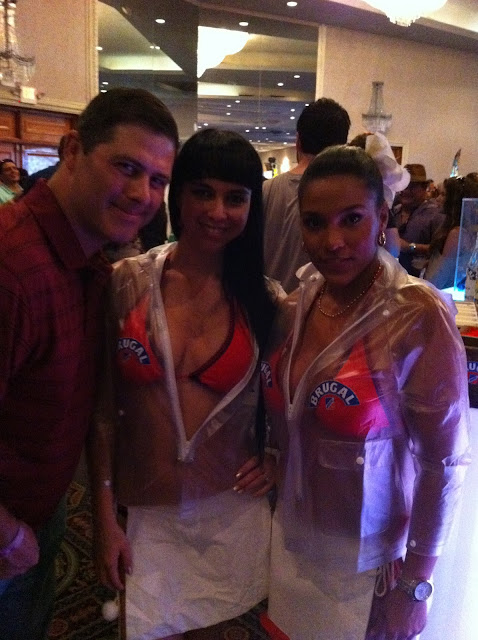 Posted by Beer Drinker Rob at 9:06 AM

There is so much here I wish I could experience, ugh. Rum is probably my favorite liquor but I have never experienced the flavor profiles you are describing. Totally drinking the wrong ones.

Some of those flavors were really common and so delicious. I am a total rookie, though afterward I did see in Rob's Rum Guide (the booklet made by the event organizer) that they weren't my imagination.

The other thing is that I have no clue the prices for any of the rums I tried, with a few exceptions b/c the vendors volunteered that info unasked. I usually like to factor that into my analysis.