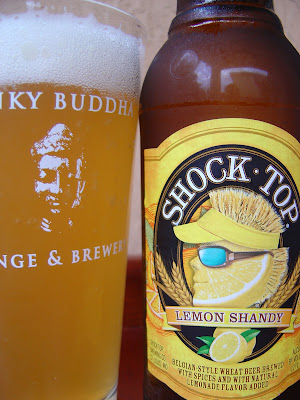 Today I'm drinking Shock Top Lemon Shandy brewed by Shock Top Brewing Company in St. Louis, Missouri. The label on this bottle from their Seasonal Collection depicts "Mohawk Dude" with his head as a slice of lemon, yellow-grain mohawk, and a yellow visor. He's still cool with his shades.

Mostly wheat aroma yet there is plenty of lemon and a side of spiciness. In the beginning, a thick and wheaty texture totally dominates and dries out the palate, most unpleasantly. It take a few sips before some lemony flavors cut through that a little, also thinning it out. Some coriander is also noticeable toward the end, but not so much, thankfully.

Highly carbonated and prickly, one of the best attributes. The flavors just aren't there. You finish with a dirty cardboard flavor at the end. I wanted a bursting juicy, easy-drinking, lemony refreshment but that was not in the cards. The 4.2% alcohol was not noticeable. Here is an alternate you should rely on instead. Pass!

Posted by Beer Drinker Rob at 7:51 AM