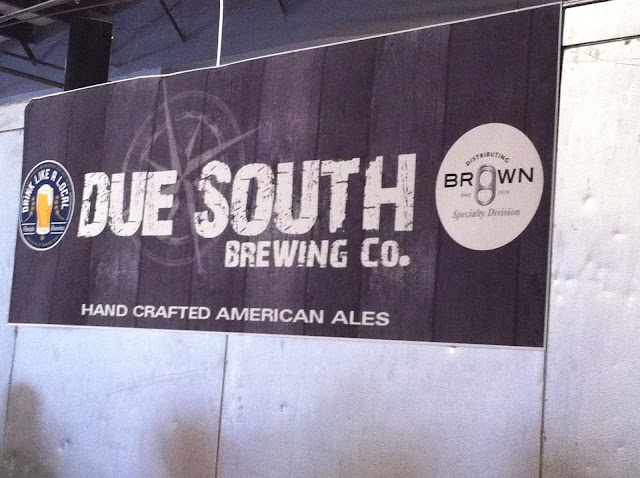 Saturday afternoon (5/12/12) I went to the Grand Opening of Due South Brewing in Boynton Beach, Florida. After overcoming Google Maps' decision to change my destination because they thought they knew better where I was going, I arrived to a large crowd around 6 pm. (Seriously, Google sent me to a dirt road in North Delray.) The location wasn't easy to find, so I was grateful for the signs covering the last few turns.

I wandered into a very large warehouse area, impressive in size. Over in one corner of the space were more than half a dozen shiny silver tanks brewing away. I bumped into a few acquaintances that filled me in on how the tasting would work. I got my cup, my wrist band and some sampling tickets and went over to the tasting area. There were two areas where they were serving beer. First, right out next to the brewing area was a long bar where knowledgeable servers made suggestions for which beer to try first, next and even last. Next to that was a closed out room with more taps, a TV and some air conditioning. 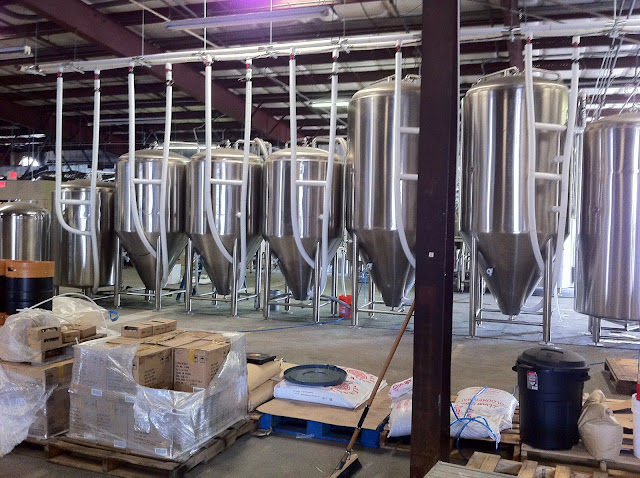 I decided to try the Honey Vanilla Wheat first. Sounded delicious! And it was a very nice beer. Great texture with a gentle sweet honey flavor and very noticeable and welcome vanilla complement. Smooth, flavorful and enjoyable. Next up, the Southern Saison. Plenty of lemon and yeast and spice. Refreshingly bitter with a good amount of that funky hay and wet dog you'd expect from this style of beer. One of my favorites of the day. 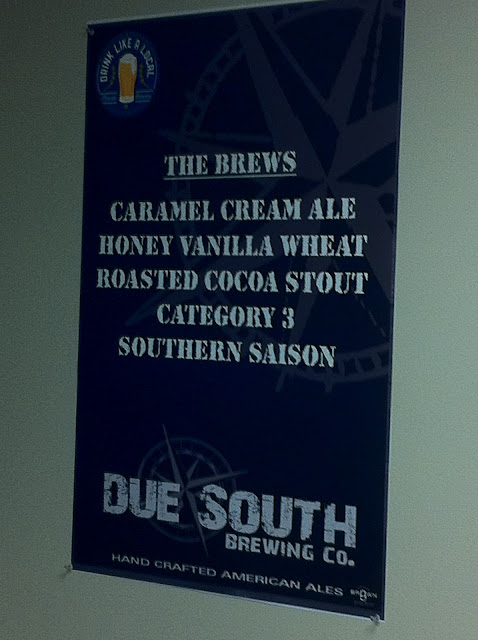 After those two beers from Due South, I went over to the guest tap area where I passed on the Cigar City beers to try a few from Tequesta and Swamphead. Guess who was pouring beers over there? The very sexy Phil from Cigar City (cost: "3 tickets") and the legendary Mike from MikeLovesBeer.com! They unfortunately let me know that the Swamphead kegs were kicked long before I asked for their 10-10-10 Double IPA.


So I went for a Tequesta Gnarley Barley Pale Ale. What a great beer! I was shocked it was a pale ale despite that being in the name. The "Barley" part made me (and lots of others, apparently) think it was a barley wine. Great pine and citrus bitterness, quite hoppy, with an excellent underlying fruity sweetness and balance. Rich, spicy and delicious. 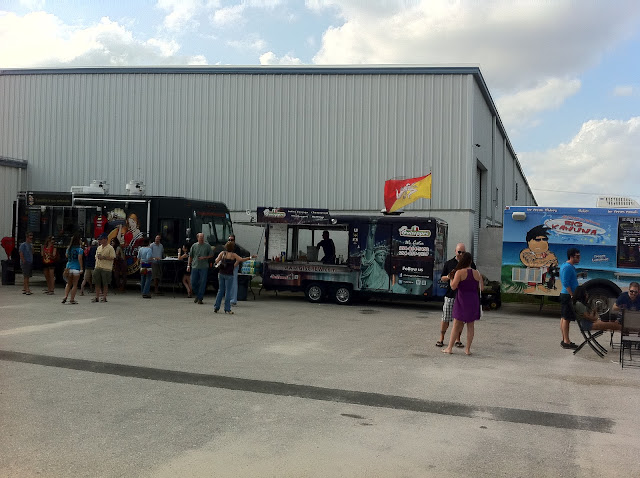 That's about the time I hit the food trucks out front. Of the four food trucks, I decided to order from Lucille's On Wheels. Pulled pork sandwich and a side order of fries. I thought it would take a while to prepare, so I went inside and grabbed a Due South Category 3 IPA. I returned to find my meal ready, and I ate right there in front of the truck. The food was excellent; the portions bigger than expected; the country music twang from the speakers needed a little adjusting though. LOL. The beer was great--nice spicy hoppiness with a good amount of citrus and awesome refreshment. Was paired well with the meal I chose too. 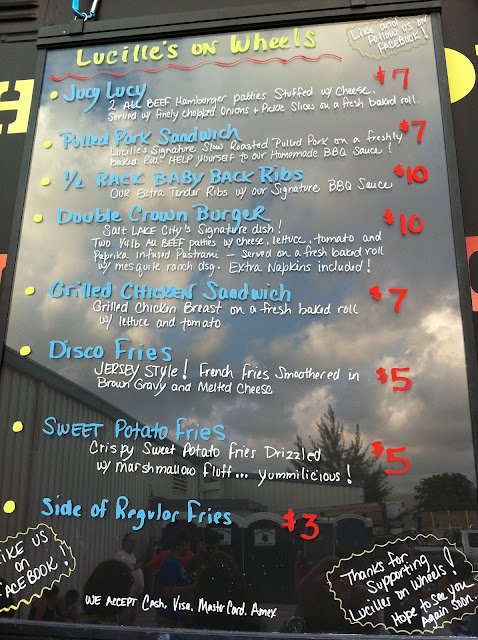 I couldn't finish my fries, so I shared them with Mike and Ruth from BonBeerVoyage.com. That act of kindness got me the inside scoop on Ruth's storied French Fry past. Pretty funny. The good doctors were good company for the night, and Ruth also taught me my iPhone lesson for the evening.

Next up... Tequesta Czech Pils. Nice flavors. Crisp and refreshing with a solid floral bitterness. Then back over to the Due South area. Caramel Cream Ale? Yes, please! Creamy texture with caramel goodness, simple and yummy. Finally I grabbed the fifth beer Due South had on tap, their Roasted Cocoa Stout. BonBeerVoyage Mike told me that this one was served on Nitro, which explained its luscious creaminess. The cocoa flavors were terrific, and I found the roasted malty flavors to be perfect. However, this beer became another discussion, with another Mike. 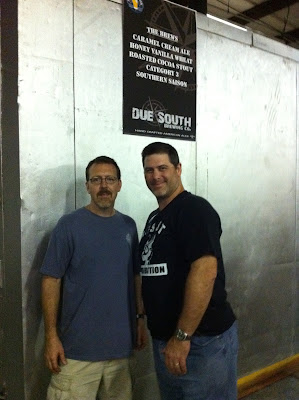 This time the owner Mike Halker shared his thoughts with us about the beer. I got the impression he felt the beer had a little too bitter finish, something he'd tweek in his next edition of the beer. He told me that going from a small batch beer to a 500 gallon production batch probably accounted for that variance and that he's going to adjust a few things.

I can honestly say that I enjoyed every single beer I tried. Some were simple, some more adventurous and unique. South Florida Beer Royalty was in the house. Besides the great staff from Due South, Chung from Coffee District, Matt from Tequesta, Ed Roberts from Total Wine, and someone pointed out the owner of Brown Distributors. A bunch of other buddies were there too: @Brewkkake, @BeahBunnie, @mugofstarnold (who was wearing an 83 Sixers shirt, pre-dating his 84 birth, LOL), and probably a dozen others. I even met a 2012 Wynkoop Beer Drinker of the Year Semifinalist!

I had a great time. I wish Boynton Beach were closer, too. Even though this was an American Craft Beer Week pre-event, I hope I get credit for being a part of it. Sorry for the sorta-OK to semi-crappy photos, too. Oh, and thank me for skipping the guy in the kilt!

Find Due South and Visit NOW... 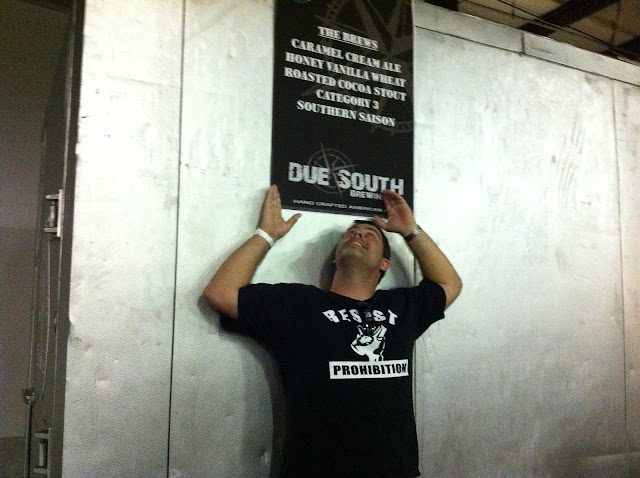 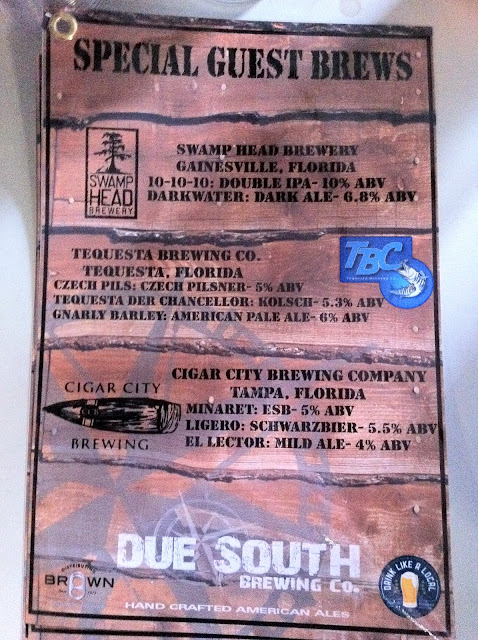 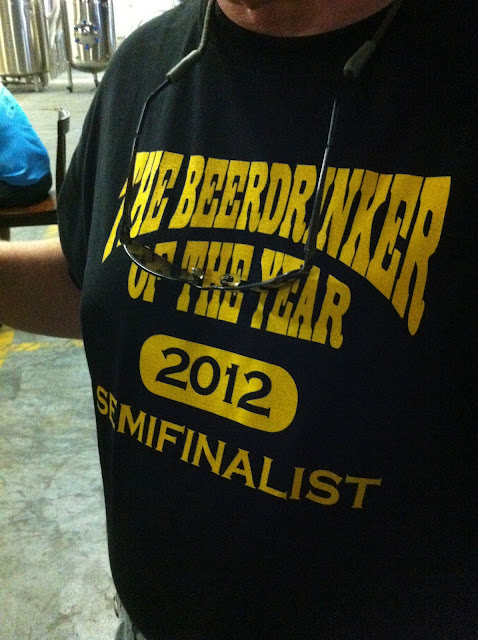 Posted by Beer Drinker Rob at 8:22 AM

Such a great time!

Hmm, I guess I should be careful when I'm talking under the influence of french fries... It was a great time though, and we are totally psyched to have Due South in the hood! ( and nice to see you, too, Rob!) Cheers!

Your secret is safe with me, Ruth. Wish I lived closer to the brewery. Good seeing you guys.