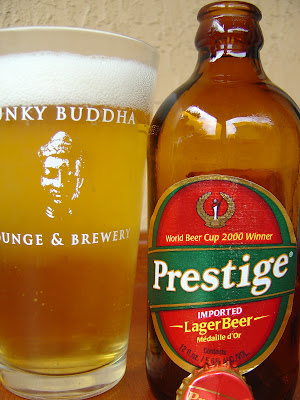 Today I'm drinking Prestige Lager Beer brewed by Brasserie Nationale d'Haiti (Brana) in Port-au-Prince, Haiti. I NEVER would have purchase this beer had it not been for the article in the Miami Herald that pointed out there were no World Beer Cup winners this year from Florida, but one in particular from Haiti. Despite the label bragging of a similar Gold at WBC in 2000, I was shocked. So shocked that I went to the Brewers' Association website myself to verify that article. Type in 2012 and Haiti and there it is. I'll be damned! Gold for American-style Cream Ale or Lager.

Massively grainy aroma full of sweet corn. Grain and corn dominate that flavor profile too but not nearly as much as the aroma would have led me to believe. This beer is on the absolute edge of flavorless. An initial light sweetness is replaced toward the end by a faint hop and grassy hit. Thin and bland, the type of drink only the imagination of someone like Jim Henson could find any flavors. I will say it was not offensive in any way, just not really desirable or Gold Medal material in any competition, let alone one with "Prestige". Get it?

Anyway, I thought it was worth sharing how the BA community treats a Gold Medal Winner, LOL. 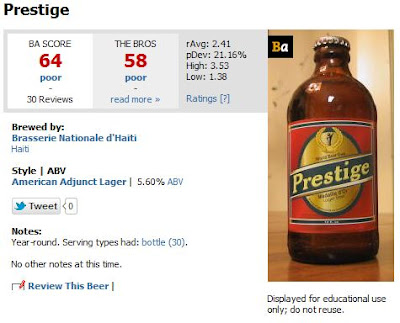 Just goes to show that judges or critics don't always look at things the same as real people. Remeber, Star Wars was rated as a flop before it was released to the public. As they say, Beauty is in the eye of the beer holder.

After I read your post, I have decided to try this beer. I must admit that your opinion is completely different from mine. I tried it and I really really liked it. I can't wait to go back to Florida to buy more because I can't find it here in Illinois.

To the first guy who didn't find Prestige worthy of its reputation as an award-winning brew, let me just state that most bodegas and other retaillers up here in NYC can never keep up with the demand because it sells out the minute it hits their shelves. I am no maths genius, but it sure looks like if those millions of people are willing to pay $10+ for a 6-pack or $2 or even $2,50 in most places in Brooklyn and Queens, there must be something special about Prestige,'cause they could instead get a 6-pack of Bud or Coors Light for under 5 bucks. Go figure.