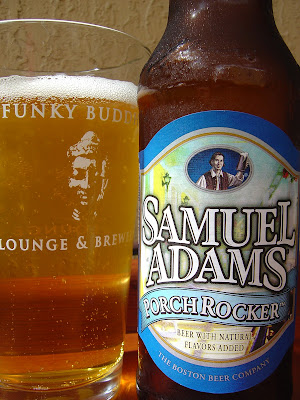 Today I'm drinking Samuel Adams Porch Rocker brewed by The Boston Beer Company in Boston, Cincinnati, or Breinigsville, Pennyslvania. This beer was inspired by the traditional Radler, a combination of German-style lemonade and beer. The label has that enormous Samuel Adams name branding in addition to the beer name banner below it. Underneath both, the artwork hides. It is very difficult to tell what the artist would have wanted you to see, but off on one edge is a rocking chair on a porch; at the top, some lights at the house's entrance. Enjoy before November, 2012.

Lemony aroma, but nearly as much as I anticipated, and there is a definite toasted grain component. Ah, there's the lemon tartness, coming through with the first sip. You have a lemon drop candy sweetness meeting a lemon rind bitterness. All the while, some malty, grainy sweetness balances out the beer. Prickly on the palate. Decent, not-too-thin body. Refreshing. Porch Rocker had a nice lingering aftertaste, lemony, and was very enjoyable overall.