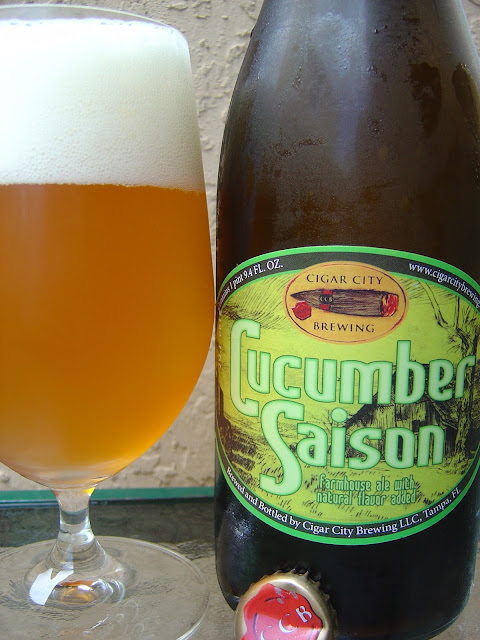 I recently stumbled on Cucumber Saison brewed by Cigar City Brewing Company in Tampa, Florida. I've heard some chatter about this beer over the past few months so decided to give it a whirl. My wine-sized bottle has a green-hued label. The bolded name dominates with a run-down farm shack and old farm machinery sitting in a field behind it.

To the side, a story in extra-micro print tells the story of the gherkin, trying to build it up from being more than just an afterthought on a salad. There is reference to cucumbers being used to "justify obscene spa service fees" which made me LOLOLOLOL. I was thinking the exact same thing about adding them to beers! Dated June 2012. 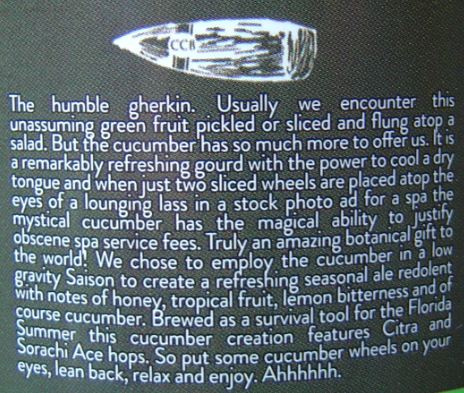 Aroma is terrific. Classic saison with cucumbers on top. Lemony tart and hay and yeast. The cucumber addition is fabulous... so far.

Wow! Whoever said cukes taste like water or nothing is a big fat idiot! (Introspection is valuable sometimes, you know.) This beer starts with pungent cucumber flavor domination right from the start! After those flavors begin to subside, a very nice underlying saison appears, magically. Lemony, yeasty and with a touch of some wet blanket funk.

Some peppery spice and even a little herbal dill come as you finish each sip. Carbonation is creamy and nice. Though the cucumber certainly grows on you as you drink an entire big boy bottle, I'd have preferred that addition to be a little more subtle and complementary to the awesome base saison. This was a fairly simple and straightforward beer, though I certainly appreciate the balls it took to say "cucumber" during the Cigar City brainstorming meeting.

Interesting, refreshing (especially from the Sorachi Ace hops), and I'm glad I tried it. Check it out!

Posted by Beer Drinker Rob at 8:28 AM