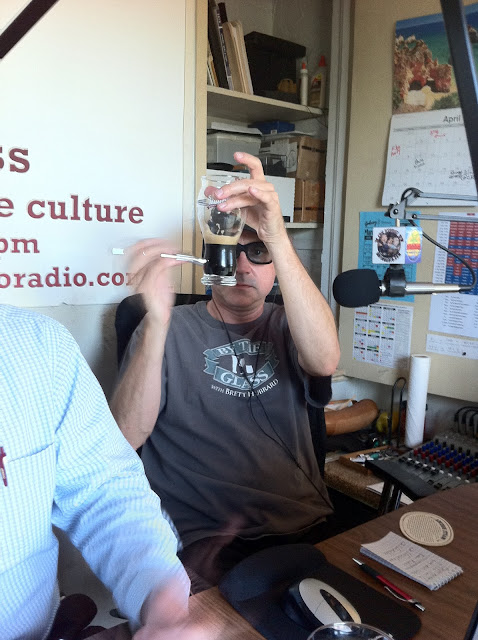 Thursday night's By The Glass Show featured San Diego's Green Flash Brewing Company. I was invited in studio to balance out the IPA appreciator to hater ratio, considering the reputation Green Flash has with the style and the tasting lineup. We were joined in studio by SE Regional Sales Representative Jeff Croy, who did a fantastic job answering questions and talking about his beers.

Green Flash is newly distributed to South Florida, within the past few months. I had previously traded for their beers or had a traveling coworker bring some back from business trips. So it's nice that I don't need to do that anymore. Before you ask, the Green Flash name has nothing to do with superheroes; rather, supposedly, there is a green flash from the sun just before it sets.

Jeff ran us through the history of the brewery and how the owners had their now-famous West Coast IPA reinvented with a new recipe back in 2002. One of my guest posters from a few years ago echoed Jeff's words in his own eloquent way. (You should totally read that post!) That restart and ten years of success have driven the brewery almost to capacity, to the point that Green Flash has announced that they will build a new brewery in Virginia Beach, to be completed around January, 2015. 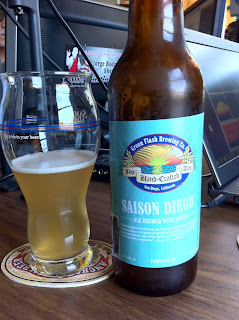 Hold on. I forgot to tell you that I interrupted the show after just 3.5 minutes to get started drinking. After all, we had five beers to get through. We started with Saison Diego. Everyone loved the bouquet and high drinkability. Lemony, spicy ginger, low alcohol, tasty.

Our next beer, Hop Head Red IPA garnered some of the most interesting comments of the evening. From Jason's "looks like a pack of cigarettes was put out in a bucket of water" to Brett's "cat piss" aroma analysis, we were all set. Personally, I love the bitterness and malty caramel balance. Quite resinous as well. Jason concluded that Hop Head Red "takes you on an adventure" and he snagged one of the extra bottles of it on the way out! Jeff said it's a best seller in Florida. 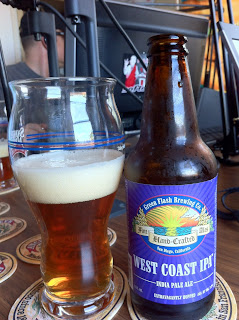 Next up, West Coast IPA. I love the citrus and grapefruit flavors that this has. Bright, crisp, dry finish. Really great. No sooner than I wrote those notes down than Dave Adams, Green Flash's Tasting Room Manager, called in. We told him what we were drinking and he pretty much repeated everything I had written down, like he was reading my notes: "citrus, grapefruit, dry" Yep! Listen if you don't believe me.

But Dave had some other fun info and stories. He talked about some of their tasting room only beers and barrel aged beers. Silver Stout, their Double Stout aged in whisky barrels for 1.5 years? Mmmm. How about their Flanders style side project? Yeah, me too. 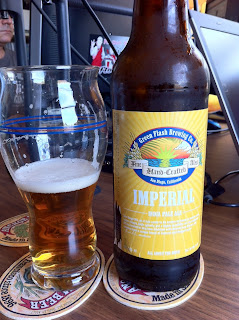 Brett wrapped up the interview and I cracked open the Imperial IPA. Hoppy, intense, yet with an awesome orange and malty balance. Creamy texture. But the anti-hop gang didn't agree. They were sports and tried it though. Jorge said, "this beer insists upon itself!" Very astute!

Finally, with a few minutes left in the show, we opened up some Double Stout Black Ale. Excellent roasty bitterness and good smoky flavors. Jorge loved this one, noting the molasses and chewy texture.

As usual, I had a great time. Love Green Flash Beers! I asked Jeff for something really interesting to end this story with. I noted that I thought their labels were extremely lackluster and boring. That's when Jeff said that each beer has art posters associated with them and that there are some new marketing people and initiatives in the works. He didn't promise anything but I'm hoping for some distinguished labels for these awesome beers! 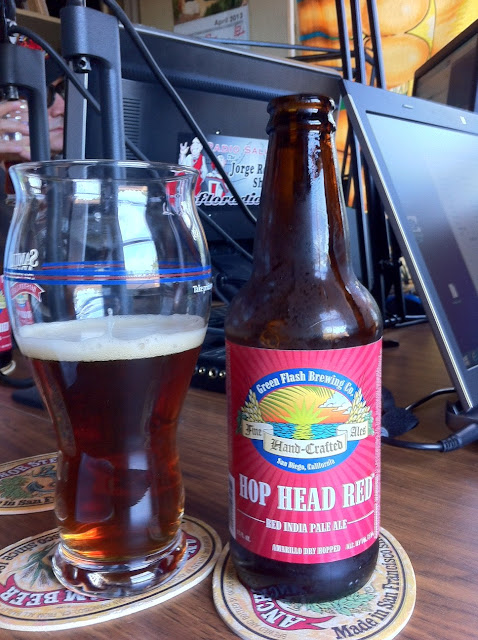 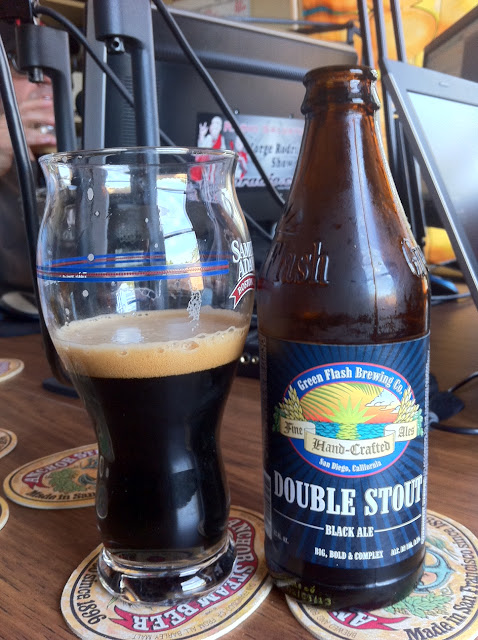 Posted by Beer Drinker Rob at 8:00 AM