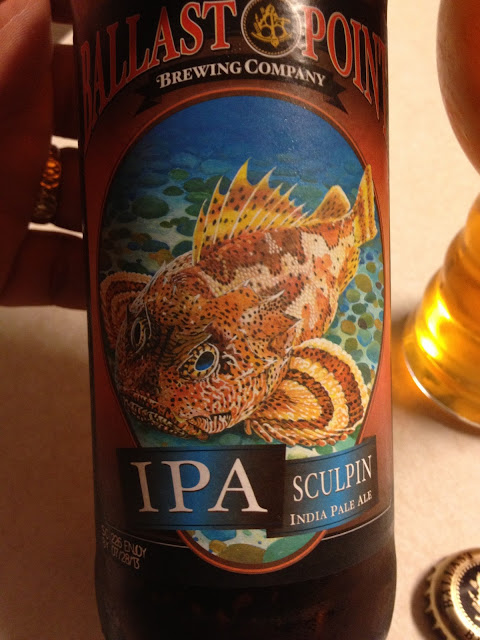 You guys remember when Darren did that guest review of Dogfish's Palo Santo Marron, right? Well he's back to tell you about another classic beer. Check it out and then go check out his blog!

It's a great story for a beer!  The overview for this IPA quickly caught my attention...talking about the homebrewing roots of Ballast Point, and how Sculpin India Pale Ale won Gold in 2010 at the World Beer Cup.  The story continues by talking about the fish, saying "the Sculpin fish has poisonous spikes on its fins that can give a strong sting.  Ironically, the meat from a Sculpin is considered some of the tastiest. Something that has a sting but tastes great, sounds like a Ballast Point India Pale Ale."  The story is quite intriguing and the graphics on this IPA support this well.  An angry (might say bitter) looking fish is swimming along the bottom of the sea.  Its golden and orange colors foretell what is to be found inside the bottle.

This beer pours with a nice golden color and slightly off white head.  I sensed citrus in the aroma, and some pine too (not the fruitiness described on their site, but that may just be me).  The taste is nice, with a full mouthfeel.  I sense a high quality malt base.  It's bitter, but well rounded.  It wasn't the hop bomb I'd expect from a west coast brewery. Seems well balanced.

At 7% ABV and 70 IBUs, this beer could almost qualify as an "Imperial IPA."  Drinking it, I thought it was.  Lots of flavor and a beer that you want to drink slowly to savor the experience.  The only disappointment I could identify was a fairly weak finish...and this isn't even a big deal.

Ballast Point Brewing and Spirits is out of San Diego, CA, and must have only recently begun to be distributed in Central Florida.  Starting out as homebrewing and then opening a brew shop, this company seems to exemplify the American Dream, and their website is worth checking out.

I decided to check out more about this sculpin fish (curiouser and curiouser).  I was a little disappointed to find the articles not boasting about the wonderful flavor of this fish.  Bitter poisonous exterior, wonderful flavor on the inside...sounded very nice.  Edible, correct.  A delicacy, maybe not so much.  But it does make for good marketing, and I'm not going to blame them a bit on that point.

Ballast point has another IPA in their school of beers (yes all fish themed), the Big Eye IPA.  It was actually a toss up for me between the two at the store.  Sculpin was more expensive (and they had a single on the shelf).  Both have 7% ABV, and Big Eye's IBUs calculate to 75.  I'll look forward to that one some day.

We can surely give a hand to Ballast Point for taking a seemingly boring fish (I know next to nothing about fish) and making it into a nice IPA. 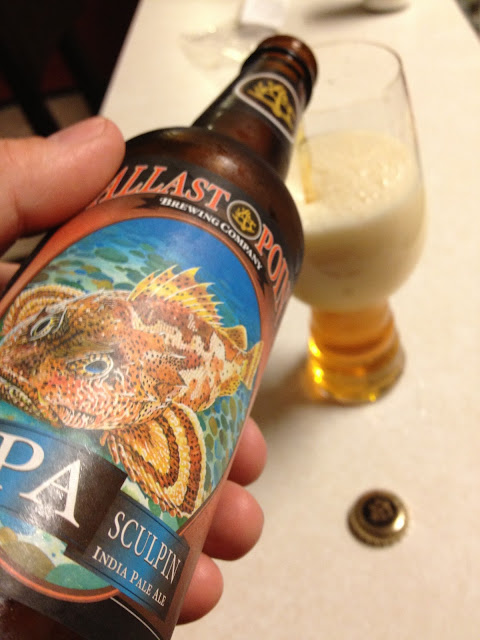 Posted by Beer Drinker Rob at 9:40 AM