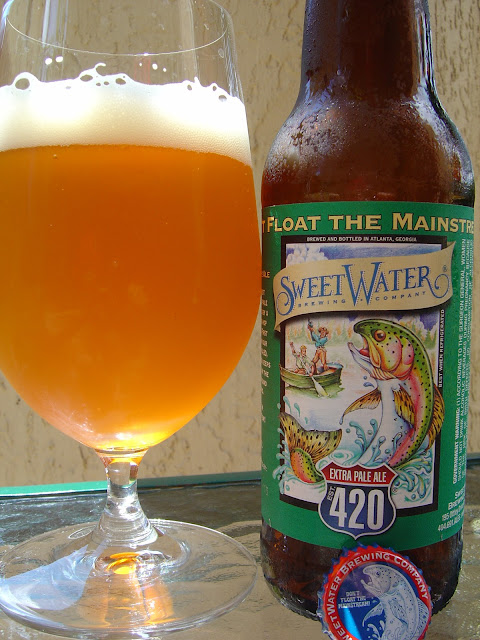 Atlanta's Sweetwater Brewing has been pushing their way through Florida over the past few years. The brewery added several new fermentation tanks last year, an expansion that will allow them to sell their beer throughout the state starting in May. Yep! SweetWater beer will be here in South Florida next month, starting with their 420 Extra Pale Ale on draft.

To generate some buzz, SweetWater sent me a handful of bottles of 420 along with their press release. If you don't see the info you're looking for, let me know and I'll give you their Communications Manager's contact info. So I guess those are the facts, so how about we have a little fun and talk about 420 Extra Pale Ale.

The label is nice, depicting some boaters in the background fishing and perhaps about to catch a really beautiful Rainbow Trout. You are reminded of the brewery motto, "Don't Float The Mainstream" as well, front and center. To the side, a story about what to expect and something about this beer being conceived in their bat cave on 4-20. Shhh. No one tell them it wasn't really a bat cave. Best if enjoyed by: 06/23/13.

Now, I've had this beer several times, just not sold locally. Heck, my sister even served it at her wedding reception last October in Atlanta. I had MANY! I might even be able to find a picture or two if you ask nicely. But this was great timing with 4-20 right in front of us.

Bready and doughy aroma with some pale malt and faint pine scents. The flavors are sweet and floral in the beginning, orange and honeysuckle come to mind. Some of the doughy bread from the aroma also sticks its nose in there too. Eventually you start to taste some lemony citrus and grassy bitterness, nothing over the top, yet those flavors do build.

Nice carbonation and quite refreshing, perfect for after that P90X Cardio crap I just put myself through. I could easily drink a bunch of these in a row, which, incidentally, I did last night. Next time will have to wait for the brewery to send some here in May. Oh, and Freddy, when you come down to Florida, let's go fishing. OK? 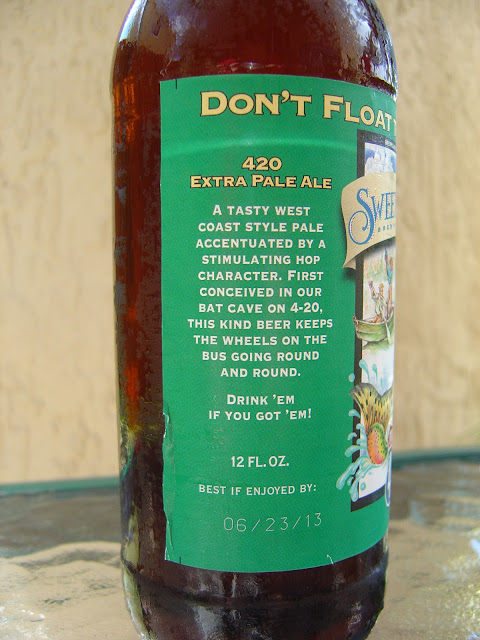 That is awesome! I just had my first taste of Sweetwater not too long ago. I picked up a Tackle Box, their variety pack, and there were some excellent beers there. Hope you get some of the rest soon!

Yeah, they will send more than just 420. This is the beer they are leading with though