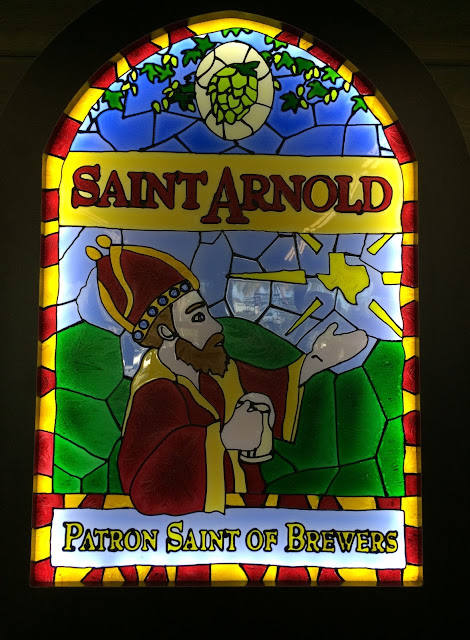 I just checked out my first "Meet The Brewer" event at Craft Beer Cartel in Ft. Lauderdale. Craft Beer Cartel has been open since December, 2014, and is owned by Adam Fine (you know him from his days leading a craft beer revolution at Brown/Fresh Beer) and Julian (I don't know his last name but stop by The Riverside Market across the street and you'll meet him!) Meet The Brewer last night introduced Brock Wagner from Houston's Saint Arnold Brewing Company.

Stephens Distributing Company recently launched the Saint Arnold beer brand in South Florida and this was their celebration. Saint Arnold has been on the West Coast of Florida for a while now, but they are now officially available locally. Not sure what took so long but since the brewery is a Top 50 Craft Brewer (brewing 66K barrels in 2014) and only sells their beer in Texas, Louisiana and Florida, I guess I'll just shut up with second-guesses. 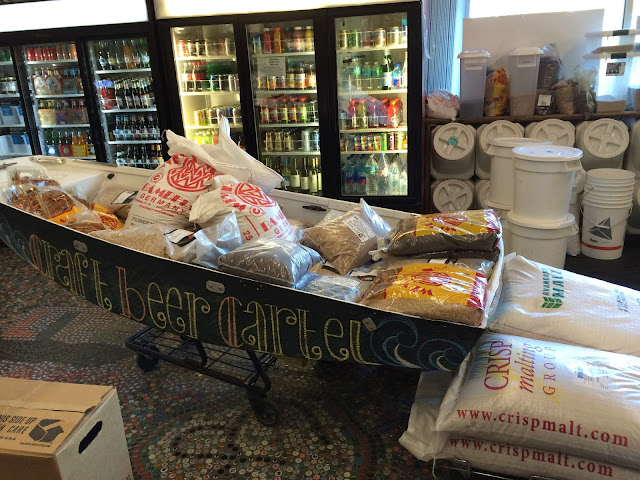 I arrived early, duh. I hadn't been to Craft Beer Cartel yet, but the store was really awesome. First, nothing but craft beer wall to wall, lots of cool displays, and I must mention the most awesome floor made from bottle caps ever! The store is not just a craft beer retailer; it's also a place for home brewers to grab supplies for their own brewing. Besides bottles and cans, you can also get growlers filled to go (even 64's, yeah!) Pretty cool place!

That's about when the Saint Arnold and Stephens teams stopped drinking at Riverside Market and got ready for their presentation. And this was no normal one - Documentarist Sharyn Bey was there doing a series on Craft Beer! Everyone got miked and ready to tell the story of the brewery and to actually Meet The Brewer! 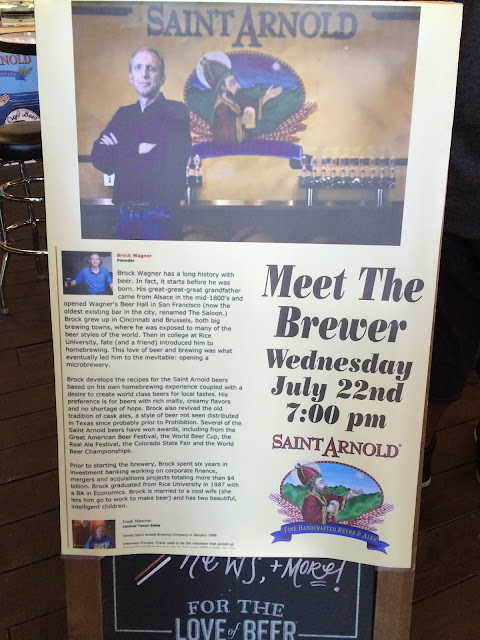 I knew some of the story from a prior conversation with Brock almost two years ago, but last night's exchange was super cool. Adam introduced Brock in a really cool way. Apparently, Adam was living in Houston when Saint Arnold opened in his neighborhood in 1994. He was first interested but eventually passionate about craft beer and over the years befriended Brock. Before he left Texas to return to Florida, he had one last inspirational conversation with Brock about opening his own craft brewery in Florida. Pretty cool!

Brock awesomely opened his presentation with "Bueller, Bueller" then talked a little about his background. He learned to homebrew from his Resident Advisor at Rice University (total party school, LOL). After college, he took an investment banking job that required him to be money motivated (which he wasn't). So he quit and opened a brewery because it was going to be simple as the only craft brewery in the area - everyone would just line up to drink the new spectacular beers he was brewing! 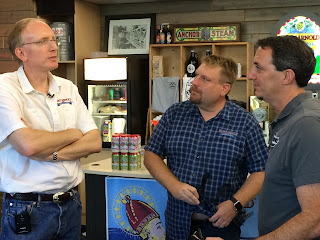 Didn't quite happen that way though! Brock said they spent the better part of seven years just educating their customers, several times questioning the viability of the business. But things started to turn then. Saint Arnold customers started to include women and men under 35, people celebrating 21st birthdays on a tour of the brewery.

Brock said as a homebrewer he never repeated a recipe, but as a professional brewer he opted for Amber Ale to be their "forever beer". Amber Ale is still the #2 beer in Houston though a lot of that has to do with tradition. The brewery now has a long list of core beers but also do some really fun series. They have an ICON Series, Divine Reserve Series and Bishop's Barrel Series. Many of those are really limited and some fanatics in Houston skip work to buy the really hot stuff, but I got to try a few new cool ones last night. Also, a few of those specialties become regular beers if they earn it! 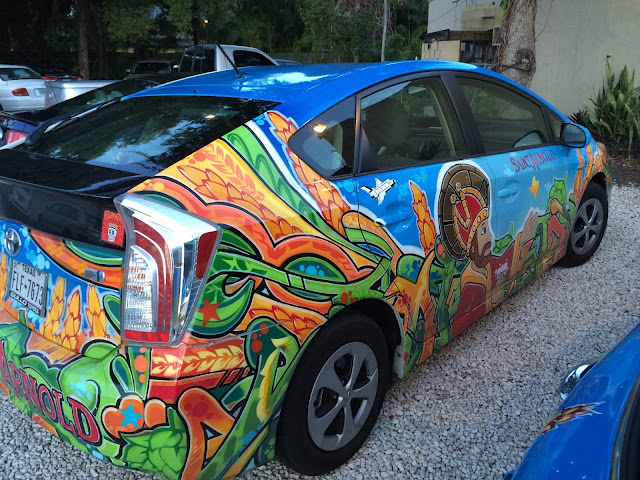 Before last night, my experience with Saint Arnold beers was definitely limited. As we headed back to Riverside Market to try a few after the presentation, we bumped into the two cars that the local Saint Arnold sales people drive here. Both are hand painted cars made to celebrate the hometown Houston Art Car phenomenon that's evolved over the past 30 years from a "pirate event" to a recognized parade with 100,000 people. Super cool!

Beer time. I tried only the ones I hadn't tried before, and besides Stephens' Jamie, I had both Saint Arnold Director of Sales Kendra Harrell and South Florida Sales Rep Dan Von Husen to guide me!
Also, Brock was there to talk beer and take photos - so cool! 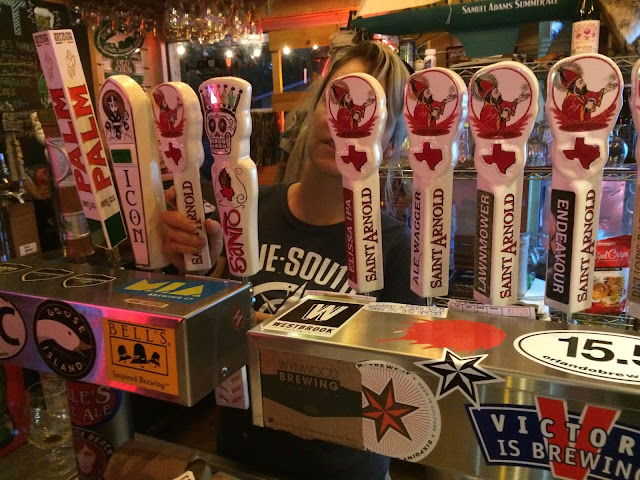 ICON Amarillo Hefeweizen to start? OK. Sure! Very nice, spicy, hoppy with citrus, wheat and very crisp. Endeavor DIPA: Rich and malty, fruity sweetness gives way to bitter resinous hoppy goodness. Very flavorful, nice balance. Then two Imperial Stouts, one a Divine Reserve Series beer and the other aged in Bourbon Barrels for over a year in their Bishop's Barrel Series. The generic numbering of each series got a little confusing for each series, but what do you expect from a guy that still does financial models in his dreams? I loved both versions! Chocolate, licorice, sweetness, roast, lots of nuances.

As a usual bourbon barrel hater (on my beers), I found the aged version to be subtle, not hot, not alcy, and really nice. Kendra suggested that to be because of the longer aging, rounding out the profile completely! I'm pretty sure she said "Jesus in my belly" too to describe the bourbon barrel aged version! 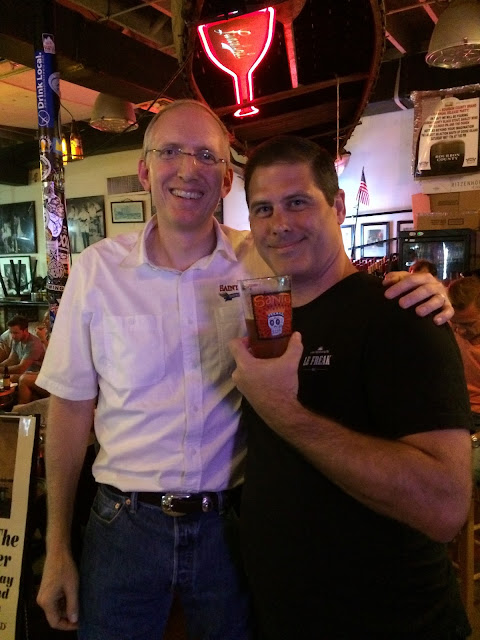 OK. Definitely check out Saint Arnold Santo (Black Kolsch), Fancy Lawnmower, Weedwacker, Summer Pils and others! Those are "sit at your pool" beers!

I tried to work as many Brock quotes in above as I could, but there were so many more. Such a nice man, passionate, creative, giving. They have several beers that drive charitable donations besides a very community-centric theme all around. Ale Wagger Brown donates $1 per case to animal rescue causes and Elissa IPA helps the tall ship in Galveston keep sailing. Saint Arnold has also had festivals to raise money and awareness for other health issues. Community is definitely a theme. 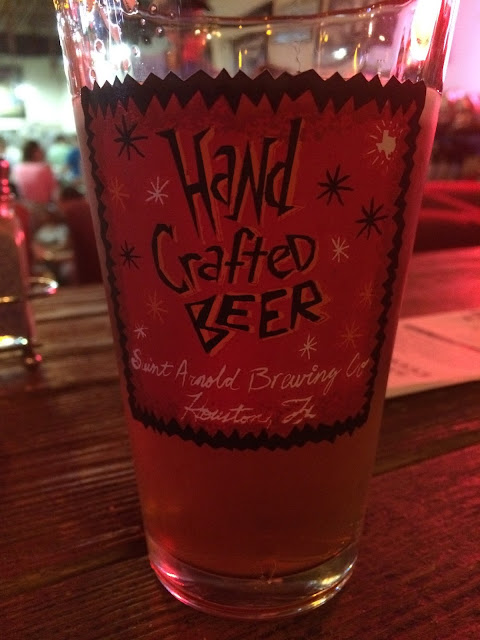 Finally, some tips (along with some of those extra quotes)...

Saint Arnold has almost zero turnover. If you want to know why, I'm sure Brock will speak with you. But before you call, be sure to have your brewery/company's Mission Statement in hand, what defines you even in dark times. Other words to sell by...

"Don't ever take away from the customer."
"Fire is cool!"
"We do what we want to do then rationalize a business purpose."
"Our beers have soul."
"Beer is about community."
"After 12 years, we were an overnight success!"

Thanks for a great evening! 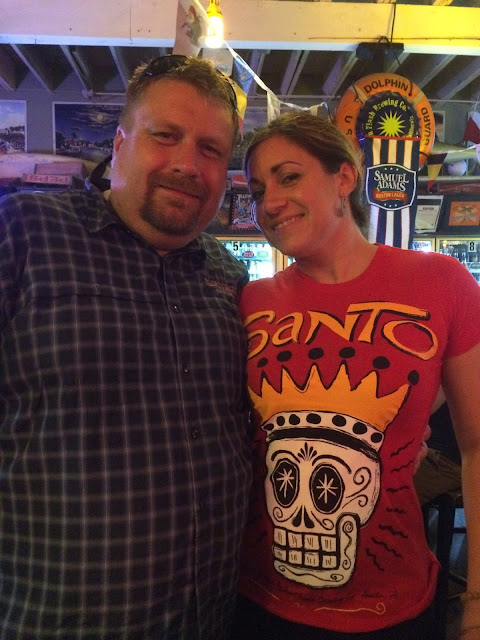 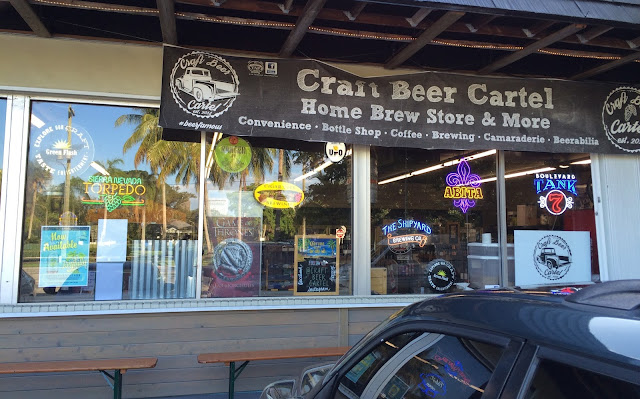 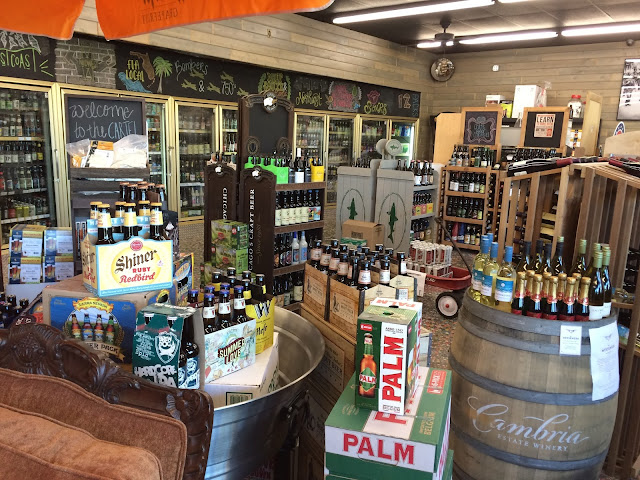 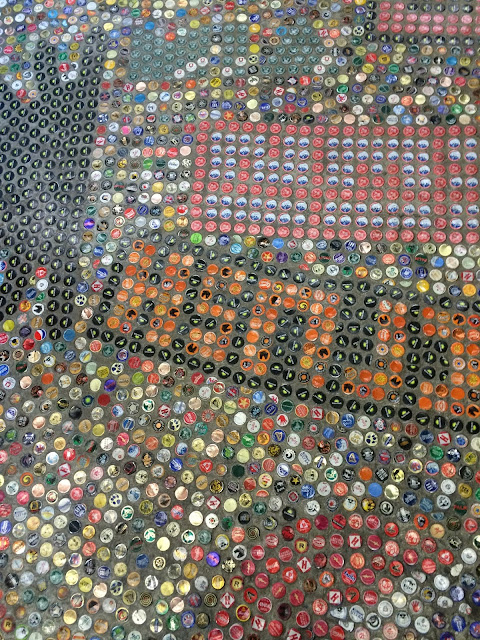 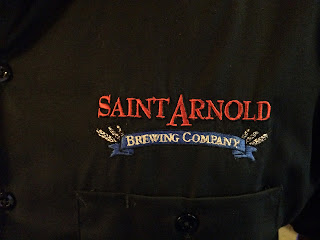 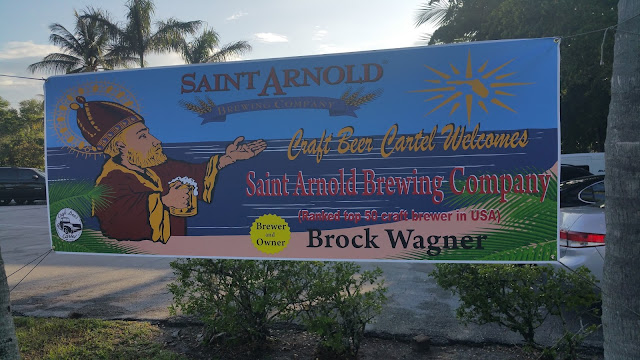 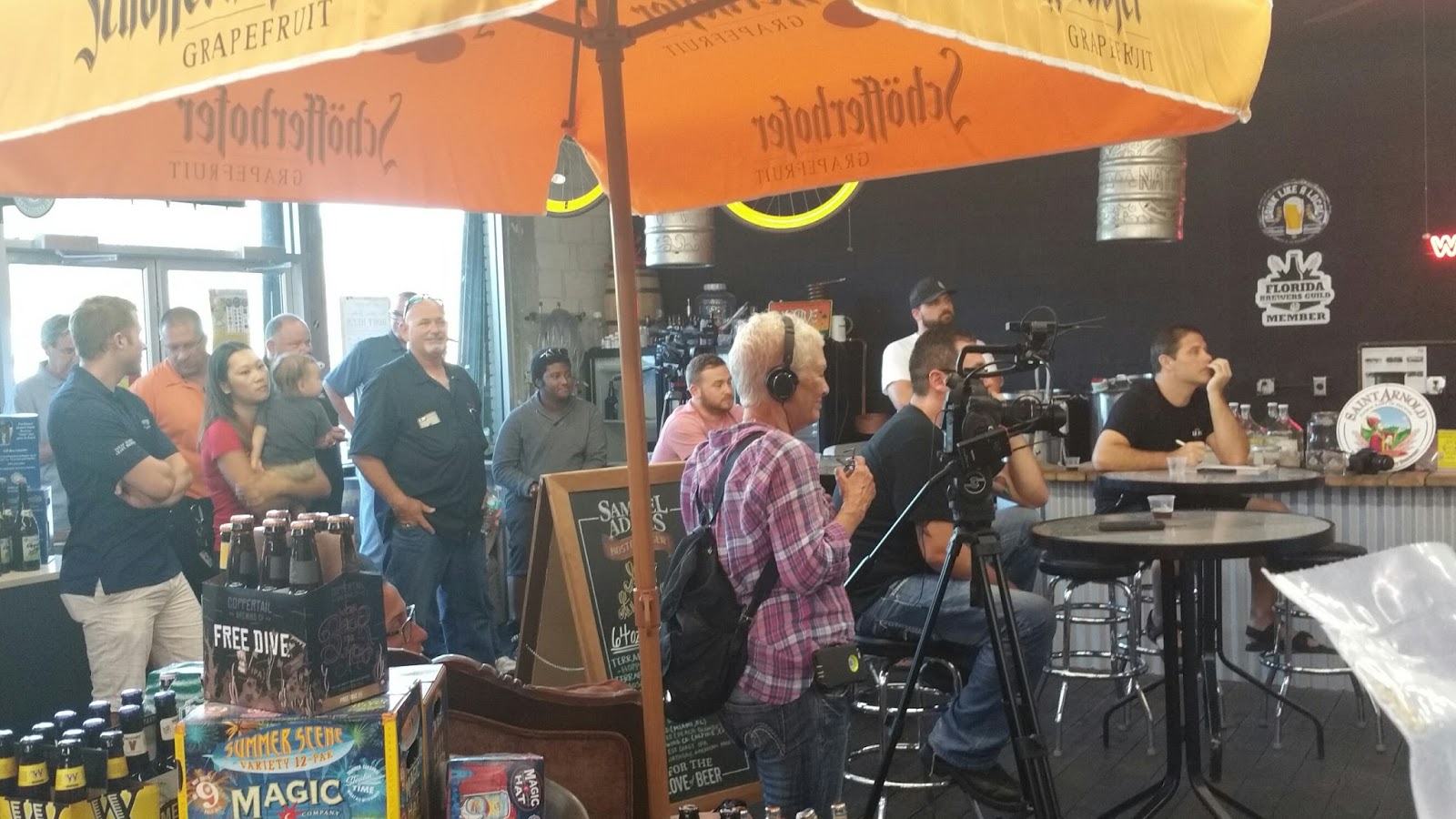